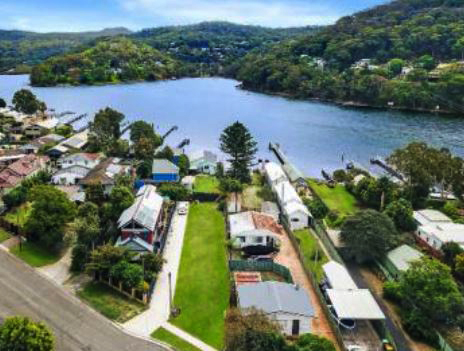 Image of the site from February 2021

The construction of a two-storey dwelling in Woy Woy has been approved under delegation after initial plans to alter the existing cottage were scrapped due to structural concerns.

The 734 square metre site at 23 Woy Woy Rd contains a single-storey house and shed which will be demolished for the build.

The site is a battle-axe-shaped allotment with decks attached to the western (water side) elevation.

The western boundary buts the water’s edge and is formed with a concrete sea wall from which a timber jetty extends over the inlet.

One public submission was received in relation to the application which related to off street parking and no turning capabilities for vehicles.

Council said the proposal complied with carparking requirements for the size of the dwelling and the shite had an “adequate” turning area for vehicles as it is a battle-axe allotment.

The works will also involve extensions to an existing studio loft above a double garage.

The loft contains a habitable area and includes a bathroom, bedroom and a living area.

Council said an assessment of the proposed addition to the garage showed “little impact to the bulk of the existing building and was consistent with the overall design of the new dwelling”.

The site had not been identified as being bushfire prone land on Council’s bushfire maps.