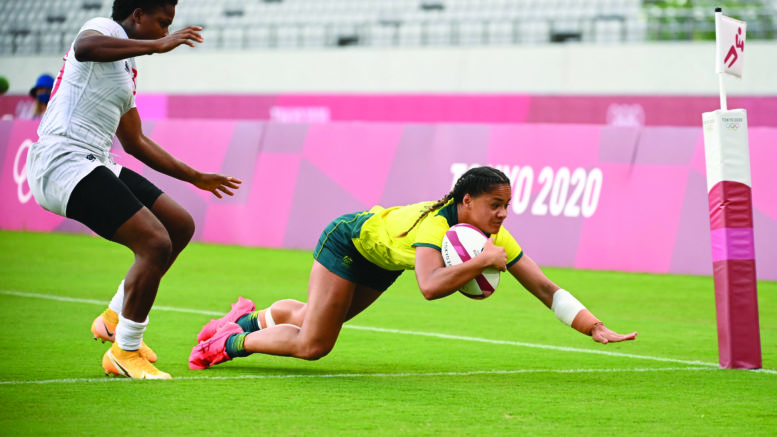 Australia's Faith Nathan (R) scores a try past USA's Nia Toliver in the women's women's placing 5-6 rugby sevens match between Australia and the USA during the Tokyo 2020 Olympic Games at the Tokyo Stadium in Tokyo on July 31, 2021. (Photo by Greg Baker / AFP) (Photo by GREG BAKER/AFP via Getty Images)

The Australian Women’s Rugby 7s team have been eliminated from the medals run despite improving throughout their campaign and concluding with a consolatory win and fifth place finish.

Berkeley Vale’s Faith Nathan had a strong showing throughout the Aussie’s three-day tournament, starting in all six matches and scoring a total of four tries.

Her first came in the team’s second pool stage match against China on Thursday, July 29, helping the team to a 26–10 point win that was close to being overturned late in the game.

This was the women’s second win of the day, after a 48–0 pounding of Japan in the morning, but two losses on Friday ensured their second place finish in Pool C behind the USA, followed by their falling out of the medals run against Fiji.

In the final pool match, 12 unanswered Aussie points were followed with two converted tries in the second half for America, for a final score of 12–14.

This same disappointing score was the result in the Fiji game later that day, although this time it was the Aussies chasing the game after conceding two tries.

Nathan’s scored just before half time to give her side a nine-point margin to cut down in the second half, although they were only able to reduce it by seven.

However, these losses did not shake the form of the Australian side and they went on to record two final wins on Saturday to overcome all competitors seeking placements between fifth and eighth.

Nathan again led the charge with the team’s opening try against the Russians, with four more following to bring the final score to 7–35.

The women again faced the USA – also eliminated from finals series in their game against Britain – where they improved upon their result from two days prior with a 17–7 win.

Faith once again opened up the game’s scoreboard with the opening try, followed by two more against America’s one.

The result granted the team a fifth-place finish, ahead of USA in sixth, China in seventh, then the Russians in eighth.

Britain finished fourth after losing to bronze medallists Fiji, with France and New Zealand in second and first after a 26–12 Grand Final.

Fifth out of 12 is certainly less than the women were striving for – and were capable of – yet the team’s final day effort showed their commitment to always performing at their best.

Faith Nathan was a crucial factor in their achievement at this tournament in ways beyond just the scoring of tries.

Nathan put her body on the line in defence many times, most notably against Fiji wherein she picked up a small injury scare yet played on.

The Aussies were shown the high quality and physicality in women’s world rugby but they howed the rugby world they deserve to be in the running for the number one ranking.

Rise and fall of the Olyroos