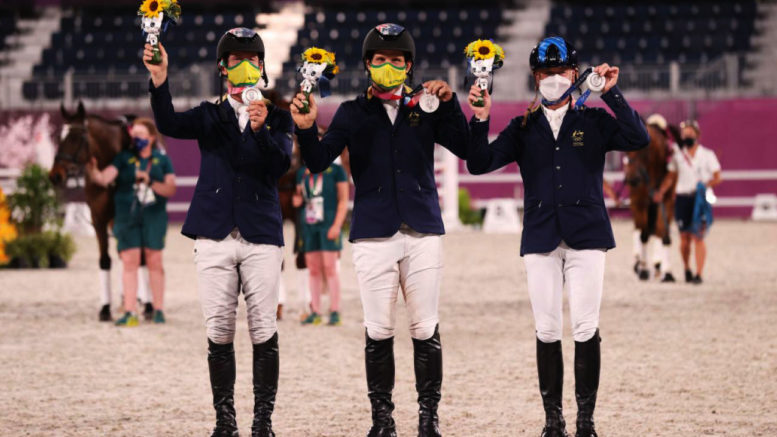 Fifteen gold medals have so far been won, the fourth highest of any nation – tied with Britain – including nine in the swimming pool and four for Emma McKeon alone: the new all-time most successful Australian Olympian.

A further four silver and 17 bronze brings the total medal tally so far to 36, the sixth most behind Japan with 40 and Britain with 48.

As well as swimming, medals have come in rowing, canoeing and kayaking, cycling BMX and road, equestrian, surfing, sailing and tennis.

With the swimming races now at an end, the Australian team can look back on their single greatest Olympic performance in the pool of all time, earning 21 medals including nine gold and at least one medal on every day of finals races.

The final swimming medal has come not in the pool but in the Open Water Women’s 10km, where Kareena Lee of Noosa placed third.

After a silver in London 2012, a bronze at Rio 2016 and in the Women’s Kayak Slalom at Tokyo on Tuesday July 27, Jessica Fox finally reached gold in the Canoe Slalom, two days later on Thursday.

In sailing, Matt Wearn from Perth has won gold in the Men’s one person Dinghy – Laser event after coming out well on top throughout 10 heats and a medals race.

Following this, Australia again won sailing gold in the Men’s Two Person Dinghy, with Matthew Belcher and Will Ryan finishing eight seconds ahead of second place Sweden in the Medals race.

With so much Olympic success already had, there were also a number of close calls within the Athletics and team sport events, most notably with Peter Bol’s fourth place finish in the 800 metre final, Brandon Starc’s fifth in High Jump, and two quarter final losses in Women’s Water Polo and Basketball.

As well as these, Quarter Finals have been won by Australian teams in the Women’s Beach Volleyball and Men’s Basketball.

These teams will play in Semi Finals on Thursday: the women against Latvia at 11:00am aest, and the men against the USA at 2:15pm.