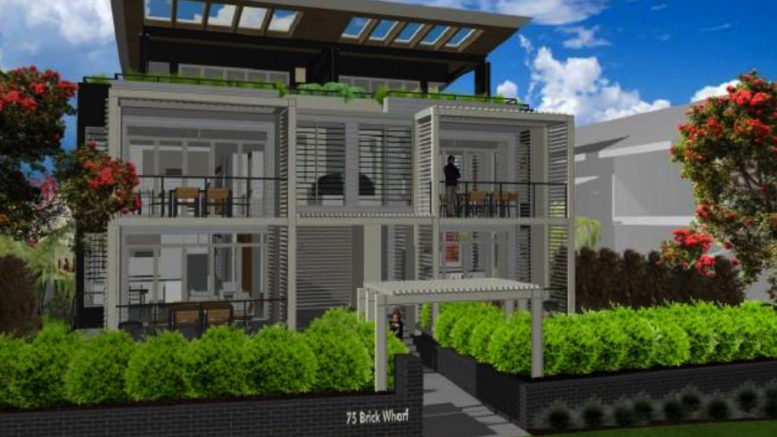 Plans for the new residential building Photo: HLA (May 2021)

A development application currently on exhibition for a residential flat building in Woy Woy has sparked community outcry after plans were said to ‘spoil’ the look of the area.

The site at 75 Brick Wharf Rd currently contains a single-storey dwelling house and shed which would be demolished if plans were approved.

The construction of a three-storey, six-unit residential flat building has been proposed, which will include car parking located within garages to the rear of the site.

Plans for three levels of two- and three-bedroom residential apartments have been drawn up with each apartment having direct access to a private balcony or terrace.

Residents would have access to storage provided for each apartment within the units and garages.

Pedestrian access from street level would be via a dedicated, centrally-located residential lobby, leading to a lift.

Carparking is proposed via a Council-owned access to a car park leading into separate garages.

Car spaces would be numbered and allocated with residential spaces along with a secure storage area for bicycles.

The car parking would to cater for eight car spaces, including two accessible spaces.

Pedestrian access to all levels would be via direct paths, staircases and lifts.

As of August 4, at least 10 public submissions were received in relation to the 75 Brick Wharf Rd development.

One concerned neighbour said she had lived in Woy Woy for 38 years and strongly disagreed with the planned development.

She said plans were not in keeping with the aesthetics of the landscape and surrounding structures, invaded the privacy of adjoining properties and blocked daylight to homes and outdoor spaces.

“Such development of buildings of this size will destroy the appeal and nature of the Peninsula and only devalue adjoining property values,” she said.

“Do not ruin what people are drawn to Woy Woy for, it’s quaintness, residential appearance and feel.

“We do not want developers to line their pockets at the expense of the long-term residents.

“The rate paying residents of the Peninsula deserve to have input into such developments and will vote accordingly at the polls.

“Do not turn the Central Coast into an overcrowded, concrete Sydney suburb.”

“This road is the premier walking and exercise area for Woy Woy residents along the waterfront,” they said.

“It includes the sacred Cenotaph area which holds a special place in the heart of Woy Woy residents.

“Buildings of three storeys will affect our amenity substantially by increasing residential densities and more traffic.

“If you allow three storeys here it will set a precedent for the whole street which would be a tragedy.”

Local community group, Save Woy Woy Waterfront, has also put the call out for residents to submit their views on the construction plans.

In a social media post on August 2, Save Woy Woy Waterfront said they ‘strongly urged’ everyone to make a submission.

“Three storeys along Brick Wharf Rd and, more disturbingly, a push to use public areas as a reason not to need open areas on a development … it won’t stop here,” the post said.

“A precedent will be set.”

The development application will remain on public exhibition until August 13.