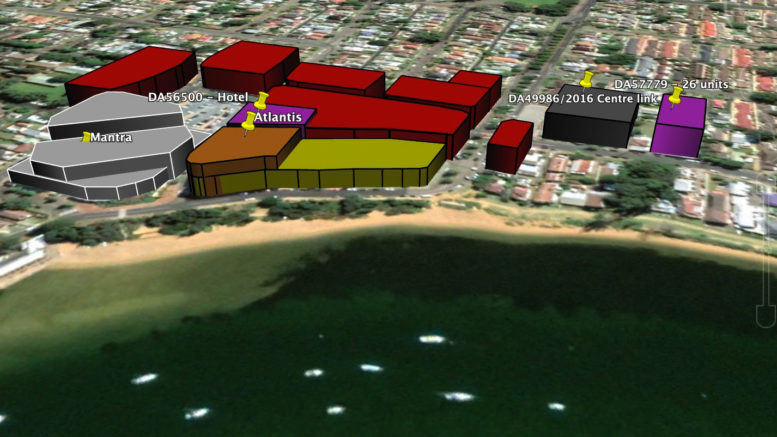 A map showing the height and bulk of proposed waterfront developments

The group is urging residents to sign a petition against rezoning a foreshore area which would allow five-storey buildings instead of the current three storeys, as previously reported by PP.

RRED spokesperson, Peter Gillis, said Ettalong Beach was under extreme pressure from high density, high-rise developments which will have a huge impact on local infrastructure, life style, and character of the seaside village.

Central Coast Council is planning to rezone six foreshore lots in Ettalong Beach along The Esplanade between The Atlantis building and Picnic Parade.

The rezoning would increase the height of buildings from 11.5 metres to 17 metres and increase the Floor to Space Ratio from 1:1 to 1:75:1.

These lots currently contain a two-storey motel, a vacant block, and a two-storey brick residence and encompasses an area of about 3,200 square metres.

The Council has received a proposal, from an undisclosed developer, to build a five-storey shop-top unit block on this land.

“Notwithstanding, the Administrator chose to forward this proposal to the Department of Planning, Industry and Environment (DPIE) for a Gateway Determination,” he said.

He said residents were opposed to the rezoning of this foreshore land because any high-rise units would cast significant, unavoidable shading on The Esplanade and the public open space in front of the beach.

He said the current three-storey limit reduces the impact of development on the waterfront.

“The properties are only 19 metres from the sand on Ettalong Beach, which has only plastic barriers erected to reduce sand erosion,” he said.

“Ettalong Beach has had two major beach erosion events in the last four years, one of which caused weeks of road closures due to the danger of the road and building collapse.

“There is still significant and continuing beach erosion close to this site which has not been secured by the Council, and is cordoned off by plastic fencing, with warning signs.”

He said the huge bulk and scale of a development of five storeys over 3,200 square metres, at a FSR of 1:75:1, would be out of character within the Ettalong Beach village, and without any redeeming features.

“Ettalong Beach is a village tourist centre, with severely limited parking and road infrastructure,” he said.

He said the current and proposed Ettalong Beach Development Control Plan specifically states that “Developments are to be designed to integrate the foreshore area to the village centre and residential development within the town centre should be able to enjoy view lines to the waterway, including Lion Island, and not be obscured by inappropriate bulky buildings.”

The petition also encourages Council to review the ongoing erosion to the foreshore.

The petition is the latest in a campaign from RRED to attempt to get new developments to comply with the local zoning guidelines.

It can be found at https://www.change.org/p/rob-stokes-mp-reject-council-height-rise-proposal-for-ettalong-foreshore.