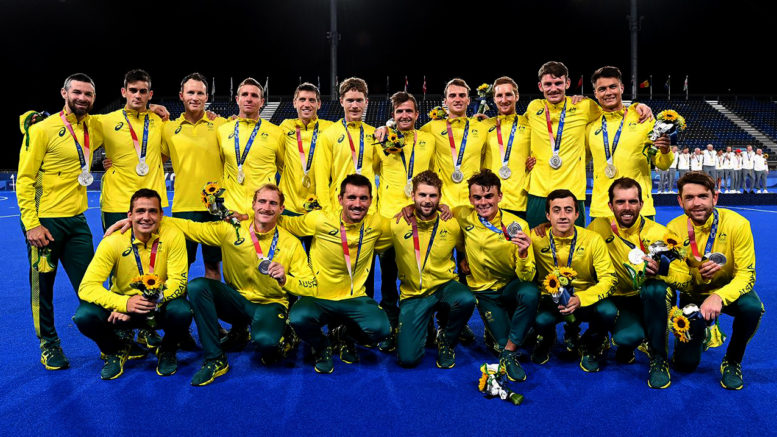 Matt Dawson from Berkeley Vale and the Australian Men’s Hockey team have won a Silver medal at the Games after losing a penalty shoot-out to Belgium in the Gold Medal Final on Thursday, August 5.

The 1-1 end score was a strong indicator of the even and intense gameplay between the world’s top two teams but Belgium clinched their first gold medal in Olympic men’s hockey history, reasserting themselves as the world number one in the process.

Emerging from the pool stage undefeated, including a 4-2 victory over New Zealand wherein Dawson played his 150th game for the national team, the Kookaburras experienced a challenging finals run against a list of top quality European teams.

On Sunday, August 1, an encounter with the Netherlands also required penalties for a winner to emerge after two goals each throughout the four quarters.

The Dutch came out with a lot of energy and nothing to lose after skimming into the finals with a fourth place finish in Pool B.

Two penalty corners came for them within the first two minutes, but Wickam ended up scoring a scrappy opener in the 13th minute.

For the remainder of the first half, more chances came for both sides, especially via penalty corners, but it wasn’t until two minutes into the third quarter that the Dutch were able to equalise.

On their fifth penalty corner attempt, the net was finally found by Holland, but only six minutes later, the lead was again found by Gover, once more pouncing on the loose possession of the opposition’s defence.

The score remained 2-1 until the 50th minute, at which point the second equaliser was found through a penalty stroke into the left corner.

With the play dwindling out over the final 10 minutes, notwithstanding a couple of late opportunities for the Aussies, penalty strokes were called upon to decide the victors.

Aussie Net Minder, Andrew Charter proved his worth with three saves against three goals for Govers, Flynn Ogilvie and Brand.

The narrowly secured win entered them into a Semi-Final clash on Tuesday, August 3 against Germany, the team who beat Holland in their Pool B match-up, 3-1.

However, this time it was a case of the Kookaburras having fun while on top, with the final score reversed at 3-1, Australia’s win.

The nervous results of the two previous games seemed entirely out of mind for the team who opened up their tally in the 7th minute with a sensational team goal involving a chip pass from Govers to Ogilvie and a final deflection from Brand on Ogilvie’s powerful diagonal strike.

Yet the Germans were not to be so easily undone; they hit back quickly with a 10th minute penalty corner goal to re-establish the tie.

17 minutes later, Govers again found the net with a penalty corner goal of his own, with a third coming for Thomas Lachlan in the final minute of the game.

Two nights later against Belgium, both teams affected a more defensive beginning than in their respective Semi Finals, leading to a deadlocked 0-0 scoreboard at half time.

The Belgians were first to pounce in the third quarter via a loose ball in Australia’s circle, scoring only two minutes after the resumption of play.

It took the Kookaburras a further 15 minutes to get their equaliser, scored by Wickam in the fourth quarter by redirecting a flying, out-of-control ball downwards into the net.

The score then carried past the final whistle and soon the net minders of each team were called up to begin one final round of penalties.

A first shot miss by Govers put the Aussies on the back foot, especially when Belgium went on to score two in a row.

A third save by Charter gave the team hope late on, but two further misses by Joshua Simmons and Jacob Whetton gave the win away.

Nonetheless, it is the best the Kookaburras have performed at the Olympics since winning at Athens 2004 and is an Olympic medal first for Matt Dawson.