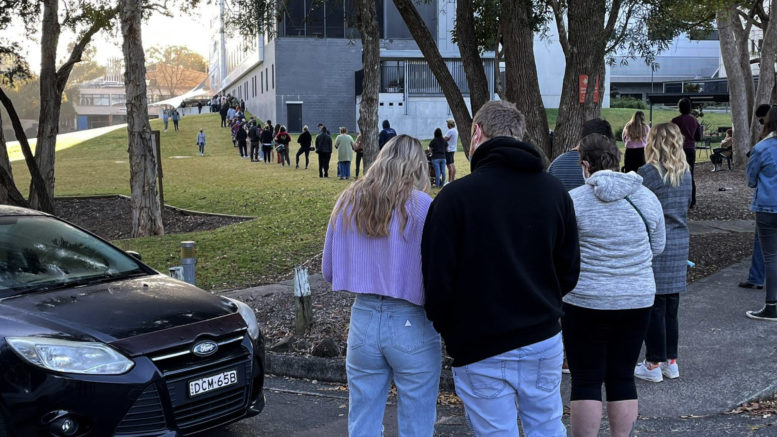 Residents line up for a vaccination at Gosford Hospital

Parliamentary Secretary for the Central Coast, Adam Crouch, has hit back at claims by Labor MPs that Premier Gladys Berejiklian has vetoed a mass vaccination clinic in the region.

MPs David Harris (Wyong), Liesl Tesch (Gosford) and David Mehan (The Entrance) said they had written to the Premier calling for a regional mass vaccination hub in the wake of community backlash after Pfizer vaccination appointments scheduled on the Coast were redirected to Sydney HSC students earlier this month.

The MPs say the Premier replied that she had referred the matter to the Health Minister and Health had advised there were no plans for a mass vaccination model as there was “currently considerable capacity for vaccine delivery”.

Harris said not having a hub in the region “makes no sense” with residents being urged to be vaccinated as possible.

“Our GPs also need to have time to treat their patients for everyday illness and not be overburdened with vaccinations,” he said.

Tesch said the government had failed to listen to the concerns and needs of the people of the Central Coast and Mehan said the State Government had “made a mess” of the vaccination program on the Coast.

But Crouch said the Premier was following the “proper process” in referring the matter to the Health Minister and had made it clear the government was looking at every option possible to administer more vaccinations.

“From August 22 Gosford and Wyong Hospitals will be converted into mass vaccination clinics providing COVID-19 AstraZeneca vaccinations every Sunday between 7am and 3.30pm,” he said.

“No bookings are necessary, as these clinics will accept people on a first-in first-served basis.

“Wyong Hospital will also accept walk-ins for COVID-19 AstraZeneca vaccinations every Monday and Tuesday between 6am and 11.30am.

“I am urging everyone on the Central Coast to get vaccinated as soon as possible, because every additional vaccination is an additional step closer to freedom.”

Crouch said there was enough staff and space within Gosford Hospital for it to operate as a (permanent) mass vaccination hub, but there were not enough doses of the vaccine allocated by the Federal Government to justify such a move.

He said the Coast’s full allocation of Pfizer vaccines had been returned on August 12 and appointments at Gosford and Wyong Hospitals which had been postponed were now being rescheduled.

“The Central Coast Health team hopes to open up Pfizer COVID-19 vaccination appointments to everyone else on the Central Coast, but currently does not have adequate supply from the Federal Government to do this,” he said.