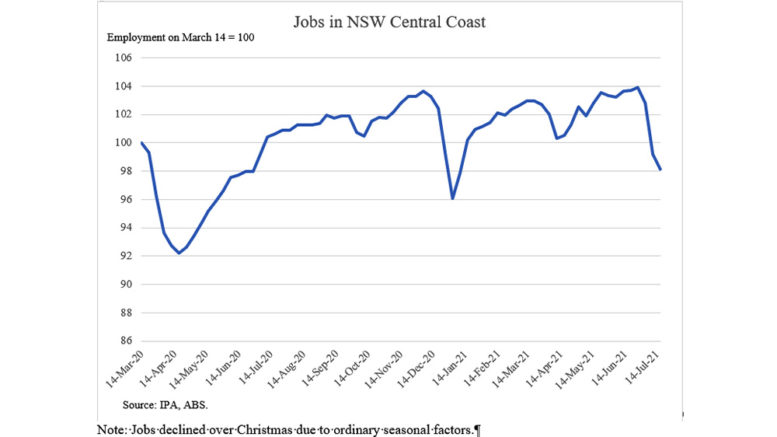 Analysis by the Institute of Public Affairs, based on data from the Australian Bureau of Statistics (ABS) weekly payroll and wages, has found that in the first three weeks of COVID lockdown from June 26 to July 17, the Central Coast lost 9,200 jobs.

According to most recent data, the total number of jobs on the Coast on July 17 was 1.9 per cent lower than on March 14, 2020 when Australia recorded the 100th case of COVID-19.

Research Fellow at the Institute of Public Affairs, Cian Hussey, said workers on the Central Coast had been hammered by the latest Greater Sydney lockdown.

“All of the jobs restored over the past year have been wiped out, putting workers back to square one a year and a half into the pandemic,” he said.

“There is almost a month-long lag in the data, which is released by the ABS each fortnight, but it is highly likely that the job losses continued through the second half of July and into early August,” Hussey said.

“Each time politicians decide to implement or extend lockdowns, they are knowingly putting the greatest burden on these people.

“Economies do not bounce back when lockdowns are lifted.

“Jobs go up the stairs and down the escalator when it comes to imposing and lifting lockdowns.

“It might be weeks until the lockdown is lifted, but it will take years for small businesses and jobs to recover,” Hussey said.

“As with every other lockdown, the most recent round of lockdowns has exclusively resulted in job losses in the private sector while the public sector remains unaffected.

“Those designing and implementing lockdowns never see the effects their decisions have on jobs because they remain protected.”

The Institute of Public Affairs (IPA) has called on the NSW Government to reduce the salaries of politicians and bureaucrats.

Results of a poll taken by the IPA, released on August 2, showed 75 per cent of respondents agreed that politicians and bureaucrats with a pay packet of more than $150,000 should take a 20 per cent pay cut for the duration of the Greater Sydney lockdown to show that everyone was “all in this together”.

“The Berejiklian Government must listen to the people and ensure that there is equality of sacrifice for the duration of the lockdowns,” said Daniel Wild, Director of Research at the IPA.

“If we are truly all in this together then the economic and social pain must be shared around,” he said.

Eyes on May Budget funding for the ABC