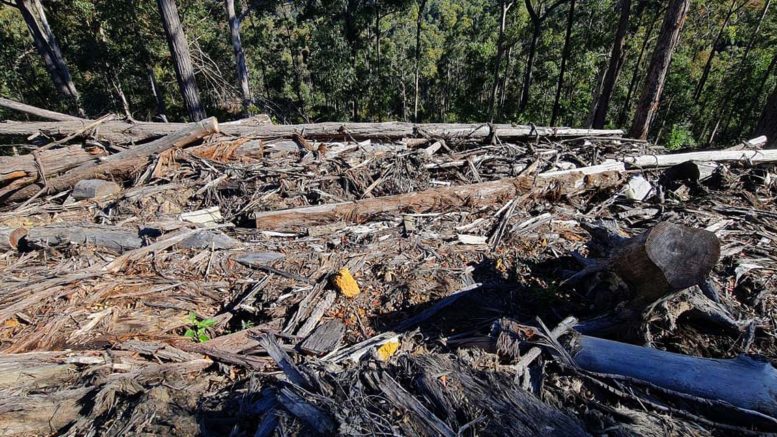 Community group, Camp Ourimbah, is stepping up its campaign to end logging in Ourimbah State Forest.

Da Silva presented photographs taken in December 2020 of a koala located less than 1km from the edge of the forest and identified a range of koala browse trees in the compartments, which she said provided a vital food source and habitat for the vulnerable species.

The report she compiled highlighted the strong possibility of a koala population living in the area earmarked for logging.

Da Silva said the Forestry Corporation responded saying that “in the areas where timber harvesting takes place, the identification and protection of habitat for threatened species is strictly regulated”.

Forestry said surveys and broad area habitat searches were carried out prior to every forestry operation to identify records and ensure suitable habitat was set aside.

Da Silva said despite community-led research and opposition, Forestry Corp decided not to take the new evidence into account.

“They are only required to leave a 25m exclusion zone around a tree if a koala is found and are then able to remove that buffer and cut that tree down once the koala has moved.

“I am very concerned they will not take proper koala monitoring into account in their upcoming operations,” Da Silva said.

The correspondence between Da Silva and the Forestry Corporation is part of a growing opposition to native forest logging on the Central Coast, which is drawing the attention of local politicians, community leaders and conservation groups.

“We, from Camp Ourimbah and the wider community, are very concerned about protecting our koala populations on the Central Coast,” Da Silva said.

“If 79.7 per cent of the wood from Ourimbah State Forest is being used as low-quality salvage, pulpwood and firewood – see Forestry Corporation Harvest Plan regarding Ourimbah – then this raises a vital question: is low quality salvage wood really worth the price of a koala?”