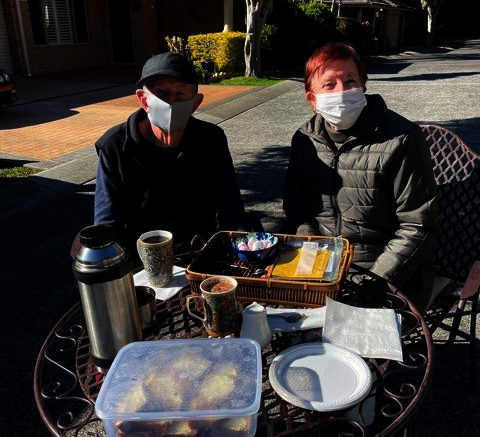 John and Dianne Quigley enjoy tea in their driveway

Comfy chairs and cuppas popped up in driveways across the Wood Glen Retirement Village at Erina recently for a series of COVID-safe driveway teas.

In one week, the village hosted 10 morning and afternoon teas, encouraging residents to take advantage of the mild weather and safely mingle with their neighbours.

“Everyone was starting to wear a bit thin and get a bit down – they’ve done enough puzzles, crosswords and sudoku,” Village Manager, Vanessa Fordyce, said.

“This was a golden opportunity to have residents come out into the sunshine.

“Some residents baked some scones and brought biscuits out – it was a lovely way to check in with us and the residents committee.”

“The idea was Vanessa would go around with a little pack for each resident, and everyone could come out and engage,” he said.

“I said we would fund whatever people wanted from the coffee van to make it a bit more special.

“The response was unbelievable.

“People came out that hadn’t connected with anyone in weeks and weeks.

“It was overwhelmingly successful at showing residents that they can safely connect and shout out to the people across the driveway, which is really good considering the mental health issues that have come with COVID.”

While at least 90 per cent of residents and all staff at Wood Glen Retirement Village are vaccinated, Fordyce said the virus impacted all of the residents.

“We get to get out of our homes and come to work, but for the residents, stepping outside of the village is a risk.

“Usually, we have a monthly morning tea, where we get together with residents and celebrate birthdays and connect, but we haven’t been able to do that since April or May.

“It is very nice to see the camaraderie here, which is why the driveway teas were such a success.”

Each street in the village had its own event, but the 24 newly constructed apartments presented a bit of a challenge.

“Obviously, we couldn’t have all the apartment residents congregate on the driveway,” Fordyce said.

“So, we had everyone who has a western-facing balcony to come out to their balcony, and those on the eastern side came down and sat on chairs in the sun.

“It was a bit different shouting up to those above – but everyone enjoyed it.”

Resident Dianne Quigley said the morning tea was a nice change from the monotony of lockdown.

“We got the pack the day before, and the little note explained what would happen, so we all took out our chairs, and everyone was quite happy to see each other,” she said.

The Driveway Teas were such a success; residents are already calling for a repeat.

“Between the 10 teas and hand-delivering all the packs, it took a lot of work, but it was so worth it,” she said.

The All Fired Up team accepts the award PTC