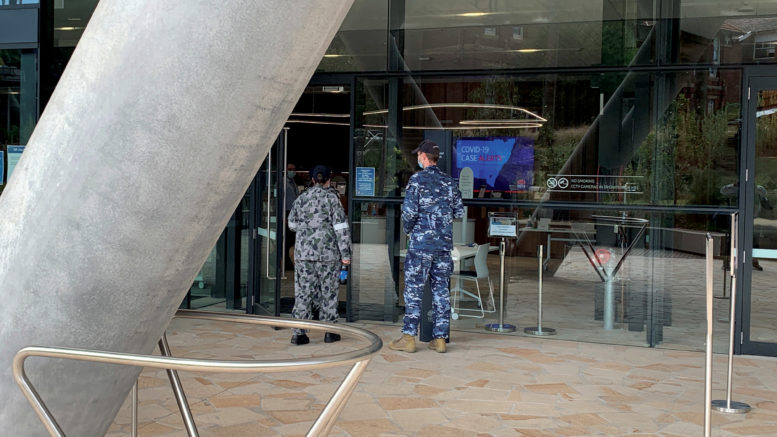 The number of COVID-19 cases on the Central Coast has risen to 39 since the current lockdown began on June 26, as Labor MPs call for the extension of the $320 test and isolate support payment to the region, a permit is introduced for those from Sydney wanting to enter the Central Coast in an effort to keep the region safe and on-the spot fines for Public Health Order breaches are increased to $5,000.

Two cases were announced on August 13, with one linked to the Lake Munmorah Public School cluster and one under investigation.

Five more were announced on August 14; the first case linked to a previously notified case, two linked to Lake Munmorah Public School and two household contacts of one of those cases.

On August 15 two more cases were added, both household contacts of previously identified cases and part of the Lake Munmorah Public School cluster.

One case was infectious in the community.

On August 17 another case was announced – a household contact of a previously identified case who has been in isolation for the entire infectious period and on August 19 yet another, who is in isolation with the source being investigated.

One case is part of the Lake Munmorah Public School cluster, and was in isolation while infectious.

The third case was not on the Central Coast while infectious and the source of their infection is under investigation. This person is being cared for in hospital in Sydney.

Several more exposure sites on the Coast have been identified, with the latest including:

Residents are advised to check the NSW Health website for times and dates.

Fragments of the virus have been detected at the Bateau Bay Sewage Treatment Plant, which serves an area of about 39,000 people.

Coast residents could now incur a $5,000 on the spot fine for breaching self-isolation rules, lying on a permit or lying to a contact tracer (already a criminal offence).

A $3,000 on the spot fine can be incurred for breaching the two-person outdoor exercise/recreation rule or breaching rules around entry into regional NSW for authorised work, inspecting real estate and travelling to your second home.

Those wishing to enter the Central Coast from Sydney must now have a permit, available through Service NSW, with the following permissible reasons: authorised workers from LGAs of concern; inspecting real estate (but only if genuinely need a home to live in – no investment properties); and travelling to your second home (only allowed if using the home for work accommodation or if the home requires urgent maintenance and repairs).

Outdoor exercise is still limited to two people only, unless from the same household.

As confusion reigns over the 5km rule, Parliamentary Secretary for the Central Coast, Adam Crouch, has clarified the situation for Coast residents.

“You are permitted to travel into an adjacent LGA for essential purposes (but only) within five kilometres of your home.”

Crouch also warned that any Coast residents considering travelling to Sydney for protest gatherings on August 21 could face hefty fines and possible arrest.

“If an ‘anti-lockdown’ protest is held this Saturday, the only thing it will do is keep everyone in lockdown for longer,” he said.

Premier Gladys Berejiklian said the vast majority of people are doing the right thing but there are a handful of people who are wilfully breaking the rules and putting the rest of the community at risk.

“The increased fines and heightened police presence are about ensuring people who are doing the wrong thing are caught and punished appropriately,” Berejiklian said.