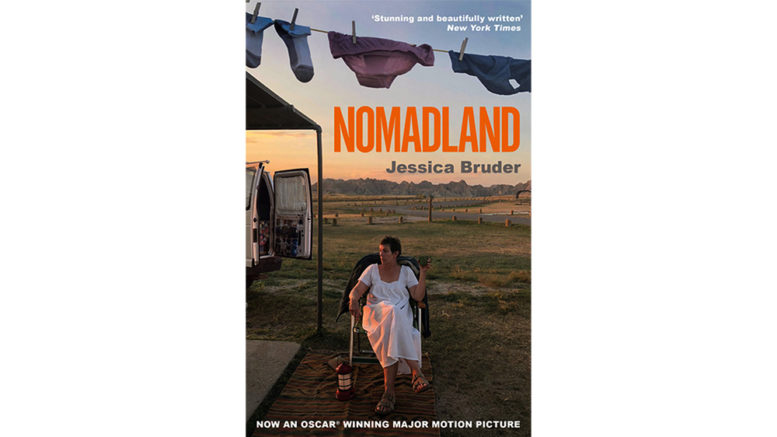 I was surprised when I found out that Nomadland was a book.

Last year there was so much talk about the movie, especially as it won Academy awards for best picture, best director and best actress, that I didn’t realise the movie as based on a book.

Since I tend to gravitate towards fiction, I guess I didn’t notice this one – shame on me.

The author, Jessica Bruder, immersed herself in the world of vandwellers, who Bob Wells, creator of CheapRVLiving.com labels as “conscientious objectors from a broken, corrupting social order. Whether or not they chose their lifestyle, they have embraced it.”

Some people consider vandwellers homeless, to that Bob Wells says, “A homeless person may live in a van but he isn’t there because he hates society’s rules. No, he has one goal and that is to get back under the tyranny of those rules, where he feels comfortable and safe.”

These are people that are “houseless” rather than homeless.

Instead of bricks and mortar, vandwellers have “wheel estate”, which could be “vans, secondhand RVs, school buses, pickup campers, travel trailers and plain old sedans.”

Vandwellers come from many backgrounds.

Some were taxi drivers, who got kicked out of the business when Uber started.

Some worked in manufacturing which just shut up shop to go overseas.

Some have master’s degrees and are swimming in student loans.

Some have had their savings wiped out after the Global Financial Crisis.

Some fell ill and had to use all their money for medical care.

Some are divorced and lost everything in the settlement.

There are some younger vandwellers but most of them are older.

People in their sixties and seventies that are travelling around the United States looking for seasonal work; Amazon distribution centres, sugar beet harvesting, working at campgrounds and state fairs.

The author closes in on a few stories but gets particularly close to Linda May, who she met when working on a magazine story about American nomads.

Linda is a 64-year-old grandmother who sleeping on her daughter’s couch.

Not wanting to be a burden and craving her freedom she fixed up a tiny trailer and named it “squeeze Inn.”

The author notes, “Like Linda, many of these wandering souls were trying to escape an economic paradox: the collision of rising rents and flat wages, an unstoppable force meeting an unmoveable object.”

Linda has dreams of building her own Earthship and the books follows her journey to that end.

Of the many depressing facts in the book, one is, “there are only a dozen counties and one metro area in America where a full-time minimum wage worker can afford a one-bedroom apartment at fair market rent”.

This book will make you realise how vulnerable one’s financial situation really is, how easy your job can be taken away, how quickly your savings can be eroded.

It will make you angry at how companies, in particular Amazon, take advantage of its workers.

The resilience of these vandwellers is remarkable, their lives are difficult but from the book you don’t get a sense that they feel sorry for themselves.

You will also wonder if Linda ever gets her Earthship.

Trust me, you will google it.

Book Review – Of Women and Salt