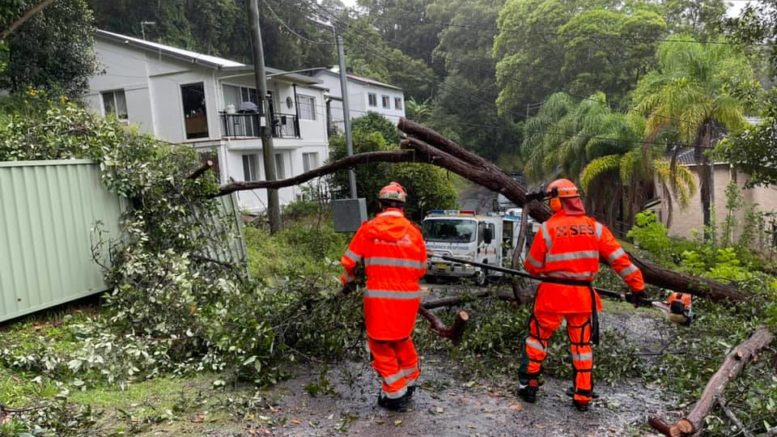 Following a month of relative inactivity when it took just five or six calls, Gosford SES responded to 29 calls in just two days as heavy rain and strong winds ravaged the Central Coast on August 23 and 24.

Gosford Unit Deputy Commander, Werner Klumpp, said some of the calls were attended by Central Coast Council, with the bulk of the call-outs attended by SES crews tasked with repairing damaged roofs and removing fallen trees.

“At first, most of the calls which came in were for damaged roofs which was expected due to the heavy rain after a long dry spell,” Klumpp said.

The rain exposed damaged roof tiles and skylights, he said.

“As the winds picked up, more calls started to come in with branches or entire trees falling on roofs, cars and driveways.

Klumpp said the unit was prepared for a busy time following severe rain and wind warnings issued on August 23.

“We were ready to kick into gear as soon as the calls started coming in,” he said.

“We always have vehicles ready and when we got the wind warning we texted all our members to be prepared.

“In this COVID environment we try to operate with just two teams being used at any one time.

“Thate way we don’t have to mix teams and if there should be any sort of COVID-related incident we would only lose half of the unit.

“Having said that, our crews are all well drilled in terms of COVID safe practices.

“We don’t enter homes unless we have to and our members wear masks at all times.

“We’ve lived with COVID restrictions for a long time now and we’re well used to them.”

Steve Tobin of the SES Northern Zone said the situation was not as bad as it could have been.

“We thought we might get more calls since we had such a long period without heavy rain but it was not as bad as expected,” he said.

“There were no great disasters and fortunately we had some pre-warning so we had people on stand-by.

“Given the potential, the damage turned out to be reasonably light.”