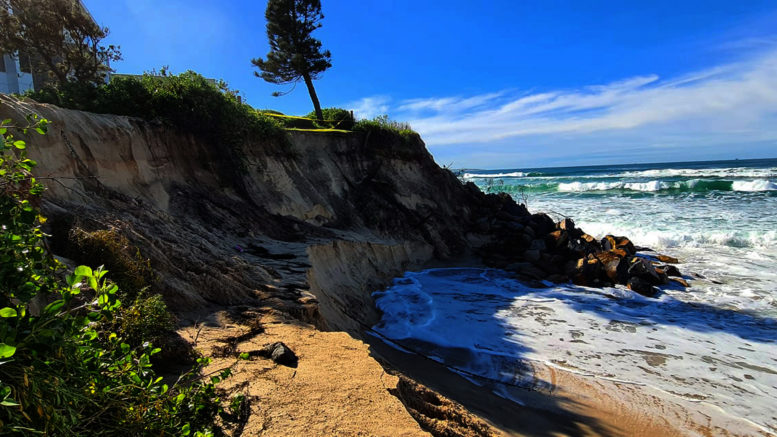 A Hutton Rd resident says that he is watching with growing uneasiness as the ocean scours the rock wall on The Entrance North Beach and more of the beach is being reclaimed by the sea.

More than 900 tonnes of basalt rock and 220 tonnes of sandstone were placed in front of homes along the beach following the powerful sea swells and storms in May 2020, which eroded metres of the seafront properties.

Arthur Stubbs, who lives at 1 Hutton Rd, at the southern end of the beach near Karagi Point, lost the corner of his property.

He’s now worried that the escarpment at the front of his property will be further destablised by a new erosion problem.

“It’s a good thing that they’ve put the rocks in front to protect our properties but at the southern end of the wall, waves are crashing in around the edge of the rocks and starting to sweep out the sand from the back of the rock wall,” Stubbs said.

The waves crashing in have also wiped out about one to two metres of sand, leaving a prominent ledge a couple of metres wide.

“I’ve been looking at it from my balcony, slowly disappearing, and when I went down and had a good look at it, you’d be surprised what’s going on,” Stubbs said.

He fears that eventually the sea will wash away the ledge and then start taking the sand from the escarpment.

“When I rang Council they don’t seem to want to do anything about it, but one staff member told me Council hasn’t done it properly, they should have taken the rock wall further south along the beach,” Stubbs said.

Council says it has been closely monitoring the beach erosion for some time and has relied on advice from both coastal engineers and a NSW government department recently.

“Council was advised after a recent site inspection by our coastal engineers that the emergency coastal protection works installed in 2020 was protecting the toe of the escarpment and performing as intended,” the Council spokesperson said.

“We will continue with ongoing inspections including drone surveys to monitor the stability of the existing coastal protection works, until a longer term solution is achieved.”

The Entrance MP, David Mehan wrote to Council to ask when dredging at The Entrance Channel would recommence, because that’s where the sand comes from to re-stock the beach at North Entrance.

In a July 1 letter in response to Mehan’s inquiries, Director of Environment and Planning, Luke Sulkowski, said there were no immediate plans for dredging as there was no current need nor funds available.

The letter said Council had lodged an application for grant funding under the NSW Boating Access Dredging Program in early May and is awaiting advice on its success or otherwise.

The Boating Access Dredging Program replaced the Rescuing Our Waterways funding program and provides up to 75 percent funding to a maximum contribution of $500,000 towards dredging.

“The project would then be proposed to be delivered between January and December 2022 for pre-dredge activities and dredging work dependent on the needs identified at the time,” Sulkowski’s letter said.

He said reduced beach nourishment in sand volume and frequency for The Entrance North Beach could be the result a different approach to future dredging programs.

“Future dredging programs may look different to the past, with berm management and a combination of land and water based dredging a possible outcome of an interim Entrance Management Strategy being developed with Manly Hydraulics Laboratory,” the letter said.

While “nourishment” of The Entrance North Beach relies on sand from dredging the channel, Administrator, Rik Hart, has given in-principle support for a proposal to use sand from the Sydney Metro West Tunnel project at Wamberal Beach, which was also heavily eroded in the 2020 storms.

West St townhouses to go ahead