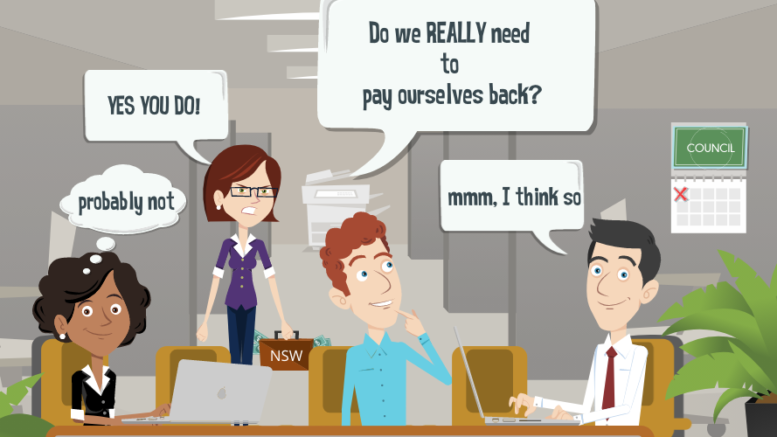 One resident’s submission to the Public Inquiry into Central Coast Council’s financial woes questions the need to pay back Council’s “bad debt” of $200M of restricted funds.

The Council negotiated a $100M bank loan in December, 2020, after the bad debt was uncovered in October and resulted in Council announcing that it had serious and immediate liquidity issues.

Council has said that the recent 15 percent rate rise and proposed asset sales will go towards paying off the debt.

The Council had spent both internal and external restricted funds on general operational matters and that is not allowed.

About $40M of internal restricted funds are to be written off.

However, the State Government says Council has to pay back the external restricted funds.

Do we really need to pay that back? – asks Ourimbah resident, Brian Davies.

“Here we are cutting jobs and selling our irreplaceable public spaces so that we can have idle money sitting in bank accounts that cannot be used because we no longer have the staff to undertake the work,” Davies wrote in his submission.

“We ratepayers are being penalised because Council staff were forced by State Government actions to do exactly what the Minister is suggesting to keep Council running.”

Restricted funds are called that because they are earmarked for particular areas and works.

Developer contribution funds must be spent in the area where the development is.

“How long would it take to effectively use those funds at current staffing levels?” he asks.

“Presumably more money comes into those accounts on an ongoing basis, admittedly at a slower rate as the State Government keeps reducing developer levies and shifting the costs on to ratepayers to subsidise developers.

“What would have happened had Council chosen not to immediately repay the restricted funds?

“The same debt would exist but it would have been a change in internal accounting rather than a commitment to banks at whatever interest they are charging.

“What if they had chosen to repay the funds from money currently being used to repay the bank loans, effectively lending themselves the money?

“The Minister has the power to write off (and presumably to defer repayment) of restricted funds.

“Why did the Administrator and the Minister not take this option?”

“I strongly object to the whole concept of Central Coast Council selling off assets, as the responsibility for a large portion of the debt does not lie with Council.

“The asset sales and rate rises are being used to guarantee a bank loan to repay restricted funds.

“So, the community goes through all this privation and loss of irreplaceable assets so that we can have $100M sitting in a bank account earning virtually zero interest, that we can no longer put to good use because we have sacked the staff we need to utilise it.”

His point was one of a number of topics Davies addressed in his 20-page submission.

The deadline for public submissions to the Public Inquiry closed on June 21.

The Commissioner, Roslyn McCulloch, has not yet addressed the public.

The Public Inquiry was called on April 26 by the Minister for Local Government, Shelley Hancock.