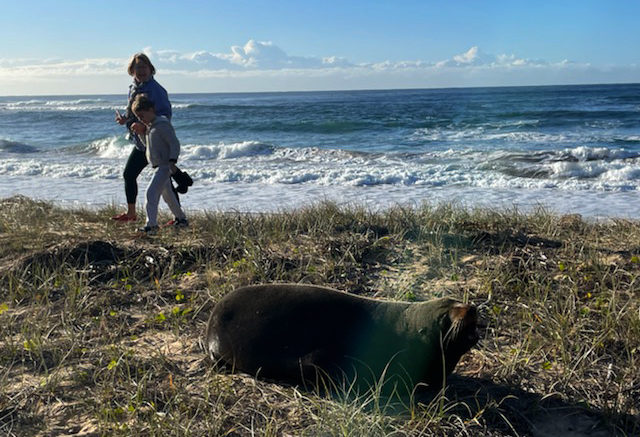 Something a little bit out of the ordinary occurred on July 22 at Bateau Bay Beach as a seal appeared on the sand.

The sub-adult Australian Longnose Fur Seal visited the beach to take a rest as the big sea swells the coast has experienced had tired the seal, making the beach a perfect respite spot.

Central Coast Dolphin Project Co-ordinator, Ronny Ling, said that this was not an isolated case, and the seal was not injured, it was just taking a break from the rough sea.

“This time of year, we get quite a few seals around the Coast as the waters are cooler than up north,” he said.

“We think this is a seal from the Barrenjoey colony.

“The swells have been really large over the past few days and for the seal it’s like being in a washing machine, they get thrown around a bit, and coming up onto the shore is just relaxing.

“The seal isn’t hurt; we’ve sent out our researchers to check the seal over and he’s in very good condition.

“It will go back in the ocean very soon on its own, the ocean holds its temperature well so the seal will most likely go back into the sea when it gets cold at night where the water will be warmer than the land,” Ling said.

The seal that appeared on Bateau Bay beach was 1.6m long and 60kgs.

The Australian Long Nose Fur Seal is the most common species of seal in NSW, with one official colony at Barrenjoey consisting of 20 seals.

Australian Long Nose Fur Seals can be found along the Coast, and there have been sightings from Catherine Hill Bay all the way down to Barrenjoey.

“200 years ago there would have been many more seals and in the 1800s settlers nearly made them extinct.

“In the past 15 to 20 years the seals have been spreading out across the coastline, all the way down to Montague Island.

“We have been in contact with Parks and Wildlife as well as Taronga Vets and have sent a report and we have our volunteers monitoring the seal and sending regular updates,” Ling said.

Whilst it is exciting to see a seal, Ling urged the community to keep in mind that these seals are wild animals and the best thing the community can do is to stay away.

“There are a few rules we push, the first being don’t go closer than 40m, they are wild animals and they can attack and bite you if they feel threatened.

“Don’t stand between the seal and the ocean, they move quickly, and they can cause you harm if they are heading back in the water.

“Never try to touch or feed a seal and keep kids and dogs well away from them.

“If you see a seal on the beach, you can report it to us, and we can check on it.

“The best thing is to admire them from a distance,” Ling said.

Seal sightings on beaches can be reported to Central Coast Dolphin Project on 0490 401 969.

Steele family will take 10,000 steps a week in red socks