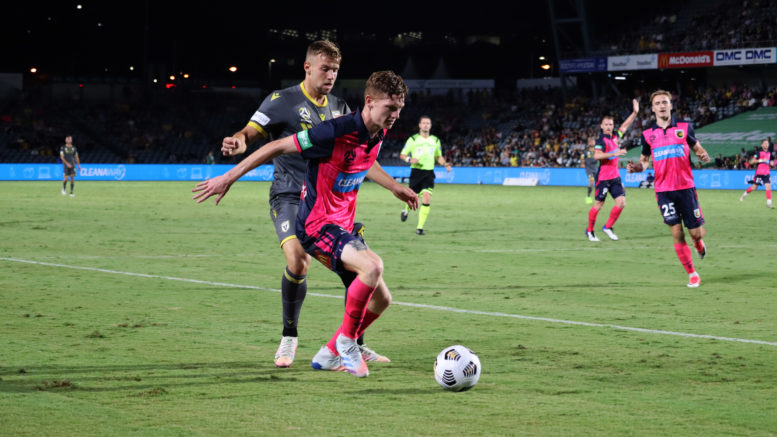 Along with 16 other footballers currently playing for clubs throughout the A-League, Asia, Europe, and the Middle East, both Ruon Tongyik and Kye Rowles were chosen by team Head Coach, Graham Arnold, to represent Australia in Japan.

The Men’s Olympic Football Tournament calls on countries to produce a national football team with an age cap at 23 years and a maximum of three players older than this.

This opens up the potential for young and promising Australian talent to represent the country on the world stage.

For 23 year old Rowles, making the team is a personal goal fulfilled, and to be able to do it with his fellow centre back squad mate next to him is even better.

“My biggest dream is to put on the green and gold,” Rowles said, less than a week before his selection was announced.

“Whether it be this year at the Olympics or hopefully sometime in the future with the Socceroos, these are my two big ones, so we’ll see what happens.”

The 24 year old Tongyik was selected by Arnold after his debut earlier this year for the Socceroos, also coached by Arnold.

Although being four days too old for selection as an under 23 year old player, Arnold chose Tongyik, along with ex-Mariner Mitchell Duke, as an overage player.

Born in South Sudan before moving with his family to Australia aged six, Tongyik said he will cherish the opportunity to wear the green and gold at an Olympics.

“It’s a great honour to be able to represent Australia and it is just a wonderful feeling to be selected,” Tongyik said.

“I’ve told my family, they’re super excited, and I think it is really starting to kick in for me in knowing that I am going to be an Olympian and I am going to Tokyo.

“Our community is going to be very, very happy for me. Seeing someone like myself, the history, all the trials and tribulations that I have been through as a player and as a person as well.

“People that I know and I do look up to, players, friends and family, they are going to be very stoked for me and I am very happy to be able to represent them as well.

The Olyroos have been drawn in Group C with Egypt, Spain and Argentina, and will open their campaign on 22 July in Sapporo against the Argentinians.

Coach Graham Arnold said the team could shock the world in Tokyo.

“It is such a special moment and special time.

“It is what you dream about and you want to play these types of teams and test yourself against the best in the world.”

This will be the first coming together of the Olyroos since the Beijing Olympics, 2008, where they did not win a game.

“It has been a long road to achieve this Olympic milestone, and today is a day to celebrate for the players, their families, friends and supporters,” Mr Chesterman said.

“To have both the Olyroos and Matildas in action in Tokyo will be great for football fans across the nation.”