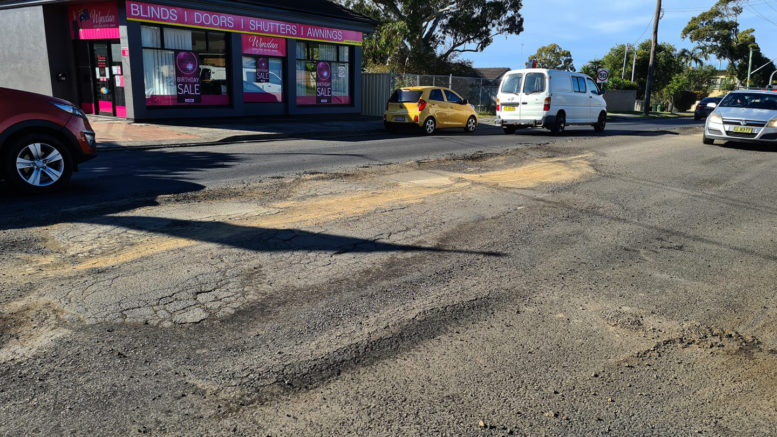 After many weeks of motorists having to slow to a crawl along a section of Main Rd, Toukley, because of serious deterioration of the road, Central Coast Council has now started repair work.

Council recently resealed the road which is part of a main east-west connector route through to the Pacific Highway to Wyong, along Sparks Rd to the M1 freeway and south to The Entrance.

Locals say that within weeks the section between Fravent St and Victoria Ave, in both directions, started to break up.

“This is the worst I’ve ever seen this road and everyone’s complaining,” said Kim Hinds.

“It’s worse than just a pothole here and there, for about a month it’s been disintegrating and getting worse.

“The road was resealed recently but nothing’s done properly and it’s just that bad.

“I’d be surprised if people haven’t had damage to their vehicles and it’s a hazard for cyclists.

“They put in a few little patches but it’s just not holding,” Hinds said.

A spokesperson said Council project-managed the resealing works on behalf of Transport for NSW (TfNSW), however, they were responsible for pavement design and specification.

Transport for NSW says Council was responsible for maintaining Main Rd, Toukley, under a Roadside Maintenance Council Contract with TfNSW.

“Council recently resurfaced the road but some sections failed due to the underlying conditions of the road.

“Council is now carrying out repair work which is expected to continue for the next few weeks,” said the TfNSW spokesperson.