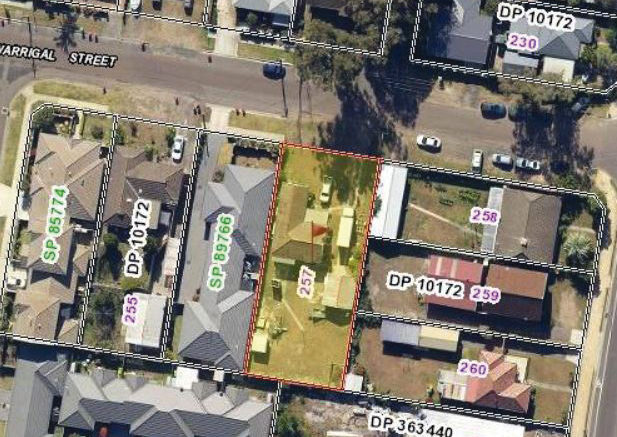 Aerial photograph of the site Photo: LPI Maps (May 2021)

Public exhibition of two major building developments on the Peninsula is expected to close on July 16.

The demolition of an existing dwelling and the erection of a multi-unit housing development at Blackwall is one of those up for exhibition.

The 2 Warrigal St site currently contains a single dwelling-house which would be demolished to aid in the construction of four three-bedroom townhouses with front courtyard fencing.

The proposal has received one public submission so far, with the contributor stating they had no objections to the development but wanted to ask Council to ‘closely monitor the demolition of the existing residence to ensure compliance with EPA requirements.’

The contributor suggested the existing dwelling contained a ‘substantial’ amount of asbestos due to its history.

The proposed construction of a six-unit residential flat building in Woy Woy has also received one public submission to date.

The development, which is located at 75 Brick Wharf Rd, is expected to cost approximately $2,944,000.

The June 22 submission said the proposal did not align with the look of the local area, with ‘too many units on the road’ already.

Locals can submit their thoughts on both proposals by visiting Council’s website before July 16.

Appeal for more Return and Earn machines on the Peninsula