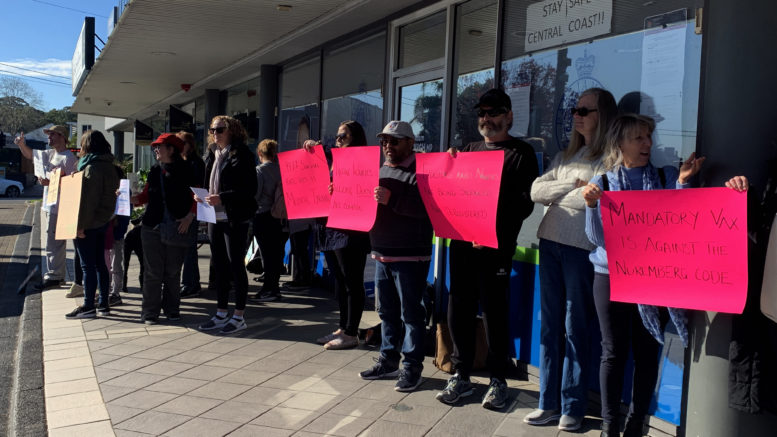 Police responded in numbers to a protest against mandatory vaccinations for aged care workers in Erina on Monday morning.

A 27-year-old man was taken into custody as the Central Coast remains in lockdown and was issued a $1000 fine for breaching public health orders and charged for allegedly failing to move along.

“The stay-at-home orders implemented by the NSW Government have been put in place to keep our community safe from the highly contagious Delta variant of COVID-19,” said Ms Wicks.

However, the man was not alone – dozens rallied against the “no jab, no job” policy at Fountain Plaza, Erina.

It comes after the federal government made it compulsory for aged care workers to get vaccinated.

Another said, “Where there is a risk, there must be a choice and mandating it on people is unconstitutional.”

It comes as more than 8.2 million Australians have been given the vaccine – 443,000 of those from the aged care sector.

The Morrison Government has given those working in the industry up until mid-September to get the first dose.

An aged care worker present at the rally said, “We’re very much about hygiene, masks and keeping our distance when we have to and abiding by other health guidelines to keep our clients safe.”

“But if these residents that are ‘vulnerable’ have been vaccinated then surely, they’d already have some level of protection against contracting the virus, so it shouldn’t be dependent upon the vaccination status of those around them.

However as reported last week – the Central Coast is in short supply – with local clinics booked out of the Pfizer vaccine until August.

Region at start of roadmap to freedom