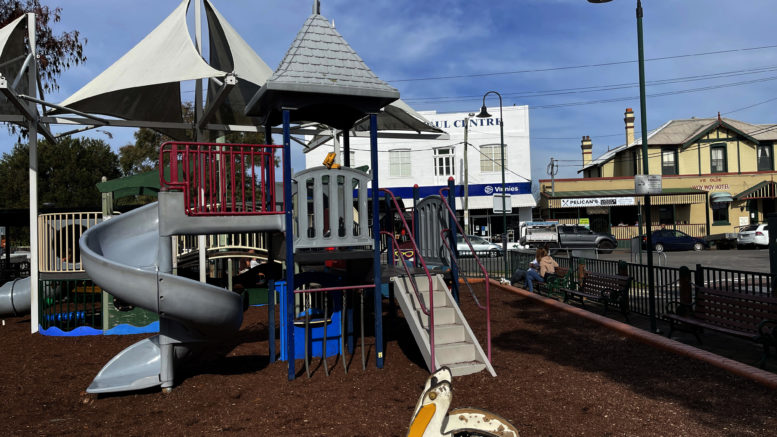 Former Gosford Councillor and Committee Member of the Gosford City Playground Strategy, Vicki Scott, has said she is ‘disturbed’ about Council’s last-minute plan to demolish the Pelican Park at Woy Woy Wharf.

Scott said she was shocked at the tight turnaround from the announcement on June 22, and the planned initial demolition on June 24.

“I am quite disturbed by the fact that Council went ahead and did all that they did, opened the playground and then was going to tear down the old one,” Scott said.

“And without community consultation, (it) is appalling.

“You can’t do things like that in the community – it’s absolutely the wrong thing to do.

“I haven’t seen the new park in person, it looks like a nice park, but the old playground is tied to people through lots of means – habits, memories of going there, parents taking their children to a playground they used to play at.”

“This Administrator and State Government should be a whole lot more careful in how they run the community.”

Scott said she was encouraged by the significant amount of community feedback and hoped Council would listen.

“It’s a very strong voice we are hearing in support of the park and Council should be listening,” she said.

“They’ve now locked themselves into a box – they now have two playgrounds to maintain – I don’t know how they get around it.

“Do they want to maintain both playgrounds, or successfully prove to the public that the old playground is too dangerous for use?

“It’s expensive to maintain playgrounds – and if they’ve got two, that’s an expense when other areas are crying out for playspaces.

“It appears that they did not give the playground committee enough credibility to look at this in the planning stages and that’s the worst part for me.

“If the council is saying that the park’s safety is questionable, the committee should have looked at that and if they could get around that, and if not, educate the community and say this is why we are being forced to take it away.

“Take the community with you and let them discover that there are issues around safety standards.

“This is what happens when you don’t have democratically elected representatives to help you get through these issues.”

Since its inception in late 2005, Scott helped lead the Gosford City Playground Strategy which aimed to ‘develop, redevelop and maintain playgrounds to meet community needs’.

The function of the Gosford Playground Strategy Committee was to work in partnership with the broader community to identify opportunities for improved playground facilities across the Gosford LGA with a particular focus on providing accessible and creative playgrounds.

Scott’s last contribution to the Pelican Park was the construction of the safety fence around the playspace.