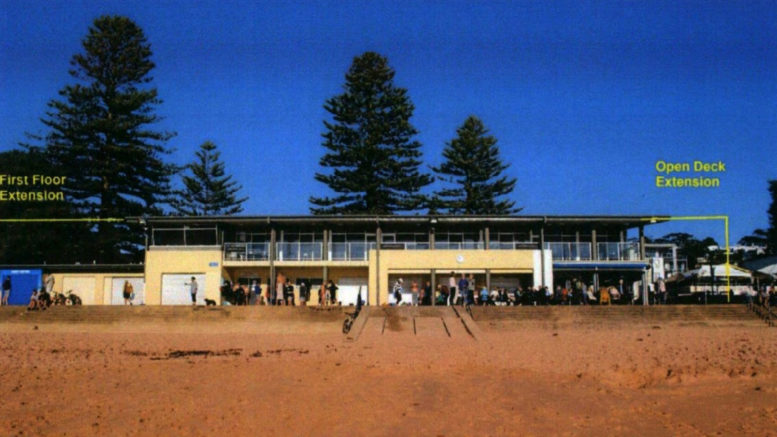 But the planning proposal for the renovation has revealed that three heritage trees near the surf club are to lose their heritage status under the Central Coast Local Environment Plan currently in draft form with the State Government.

At the rear of the surf club adjoining Terrigal Esplanade are a number of large and visually prominent Norfolk Island Pine trees and a large Port Jackson fig.

The report to Council that accompanies the application says the existing Norfolk Island Pines along the south-western side are identified as a heritage item, number 275 “significant trees“, and further to the south-east the wall memorial is also a heritage item.

But the report goes on to say the draft Central Coast Local Environment Plan removes the heritage listing of the trees along the south-western boundary of the site.

“The proposal does not require a Heritage Management Plan to be prepared and it is noted that the Council intends to remove the heritage listing of the trees under the LEP 2018,” the Statement of Environmental Effects says.

Three of the trees would be trimmed under the proposed renovation and their Tree Protection Zone (TPZ) encroached upon.

But the application says the proposal involves minor trimming of trees at the rear which is supported by an arborist’s report and recommendations and which will not impact on the trees or their landscape values.

The proposal is for alterations and additions to the club including an enclosed cafe seating area on the ground floor on the north-western side of the building with glazed stacking doors to be used in conjunction with the existing cafe.

The members’ gym on the ground floor would be relocated to the first floor and provide a ground floor plant area for air conditioning building systems and access to water tanks and extend the women’s change area on the rear southern corner.

On the first floor the area would be extended over the existing ground level public toilets and storage area to provide a new training gym plus servery, storage and toilet facilities.

There would be a new deck on the north eastern side to match existing deck areas along the front of the club.

Public comments are open until July 23.