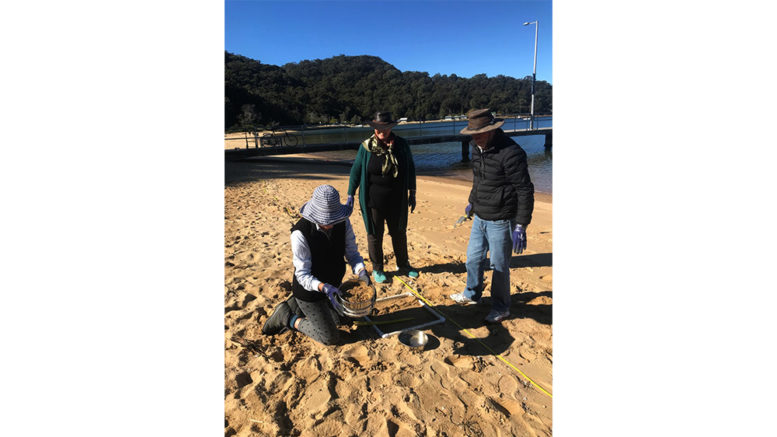 Workshop participants searching for microplastics on the Patonga waterfront

The beach at Patonga was declared microplastic free by Patonga and Pearl Beach residents who recently became citizen scientists for a day.

Resin pellets, foam beads and hard plastic fragments are examples of microplastics, the most prevalent type of debris found in our oceans, estuaries and lakes.

“No microplastics were found at Patonga Beach and that was a fantastic result,” Rice said.

“To be honest, it did come as a surprise to me, given the recent floods within the Hawkesbury and the massive amounts of debris that had washed up,” she said.

“I think this could be as a result of the extensive clean-up effort that was undertaken across the region, including at Patonga, although I still would have expected to find some microplastics in the sediment/sand.

“We will be repeating the survey later in the year and hope to get more volunteers involved so that we can collect data from more transects and therefore cover a larger area of Patonga Beach.

“Although we didn’t find any microplastics, this is still a result and will be incorporated onto the Hotspot Map within the Ausmap website,” Rice said.

Workshop participants went hunting for microplastics following the Ausmap protocol, a program that creates a visual record of the microplastics problem within Australia.

Community members and organisations like CEN are trained to undertake surveys using standardised Ausmap methods, which can then be used to calculate the average quantity of microplastics per square metre found in each location for each sampling session.

This information can then be used to identify hotspots and areas which require better management.

“The program focused on educating the attendees on what microplastics are and what we can do to help,” Rice said.

“If anyone would like to register their interest for our follow up Microplastics workshop or any future events at Patonga Beach, please send an email to waterwatch@cen.org.au.

“Research commissioned by WWF and carried out by the University of Newcastle found that we are ingesting approximately 2000 tiny pieces of plastic every week and that equates to approximately 5g of plastic or the size of a credit card per week, to put it into perspective.

Culture, Live-Music, Out & About