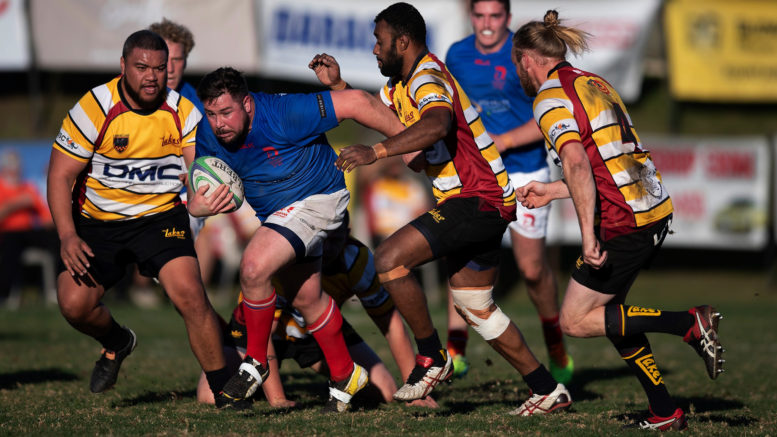 Premiership leaders, the Terrigal Trojans, were pushed all the way by the Lakes last Saturday (June 19) in a thrilling 24-20 win.

Playing at The Haven, the Trojans were host to a strong opposition who from the very first pushed firmly against the league leaders.

Both teams crossed for a try in the early stages, along with a penalty goal for The Lakes, but a second try came for Terrigal at the closing of the first half to bring the score to 12 – 8.

This four point margin proved to be the difference at fulltime after a further two tries for each team.

Terrigal, with this win, cement their position at the top of the table, while The Lakes fall just out of the Top Five.

The Avoca Beach Sharks also recorded a hard-fought win, 19-15, against at Gosford Showground.

After securing the opening seven pointer, the Sharks conceded 15 points through two Hornsby tries and a penalty goal.

From here, it was a physical contest dominated by gritty defence from both teams, with neither able to make any headway on the scoreboard.

It was the Sharks who broke the ice in the second half when they crossed for one try, and then for another very late in the game to snatch the win.

The win sees the Sharks now sitting just behind Hornsby in fifth place.

Third spot on the ladder was retained by Kariong after handing out a 66-15 thrashing to Warnervale.

At Woongarrah Oval, the travelling Wanderers proved far too strong for the Wildcats after a slow start to the game.

Warnervale came out strong with the opening try and a following penalty goal, but the visitors responded with 26 unanswered points to complete the first half.

They then posted a further 40 second half points to record their biggest win of the season.

There will be no matches this weekend as all clubs await the end of the COVID lockdown.