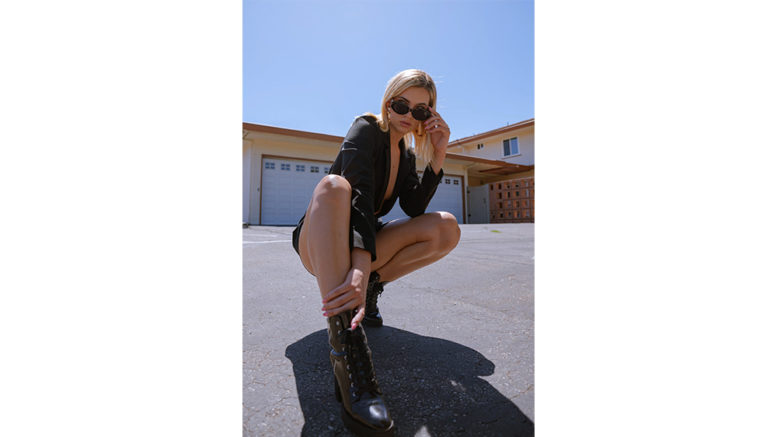 Glenning Valley singer songwriter, Sophie Curtis, who goes by the name of ASTON, is making waves with her music, both in Australia and overseas.

She says that she has been inspired by her mother who is a dancer and her musician father, and so far she has worked with some very notable Australian artists, including Cosmo’s Midnight, by penning their track, Can You Dig It, and Ricki Lee, writing her song, Last Night, that went to number 1 on iTunes.

Her first release as an artist, Next Level, was featured in the film, Hobbs and Shaw, and has recently been reworked for K-Pop group AESPA, which has 121 million views on YouTube.

In December 2020, ASTON released the track, Girl Is A Gun, and since then she has released two more tracks, Killer Queen, in March, and her latest single, Firebomb, in May.

Describing her music as loud, honest and fun, ASTON said that a career highlight was AESPA releasing her song.

“When I heard that AESPA had picked up, Next Level, I was so excited.

“When they did that, I co-wrote the new version with Korean lyrics and to see it doing so well, it’s amazing.

“I’ve been writing K-Pop songs for the past couple of months,” ASTON said.

“I don’t believe in writers block, I think that it’s just your own ego telling you that your ideas are bad.

“I always start with melodies and creating catchphrases and working from there.

“When I’m working with other artists, I’ll sit and chat with them for an hour to see what interesting things come up and we work from there.

“The song I wrote with Jordie Ireland, he actually got signed (to a label) with that song.

“I also worked with another artist from the Central Coast, Chimes.

“She’s just dropped her EP and I was able to write the whole concept for that EP which was pretty awesome,” ASTON said.

Not one to slow down, ASTON is planning on releasing new music in the coming months.

“I have new music coming out soon and one of the songs is my favourite that I’ve written.

“It’s loud and aggressive and I can see people sitting in their car and screaming it at the top of their lungs.

“I was planning on releasing new music in the next few weeks but because of lockdown I’m holding off for a few months.

“I want to release new music when it’s safer for everyone to enjoy,” ASTON said.

ASTON is also a semi-finalist in the Unsigned Only Music Competition, which is an international competition that offers independent artists the chance to be signed to a label, or secure licensing deals, publishing deals, better gigs and more recognition.

Finalists for this competition will be announced in September.

Entered in the Pop/Top 40 category, ASTON said she doesn’t mind not being signed to a label.

“I currently only have a distribution deal at the moment.

“I have a good manager and a good distribution team, and it’s been really good working with a team that really supports my music,” ASTON said.