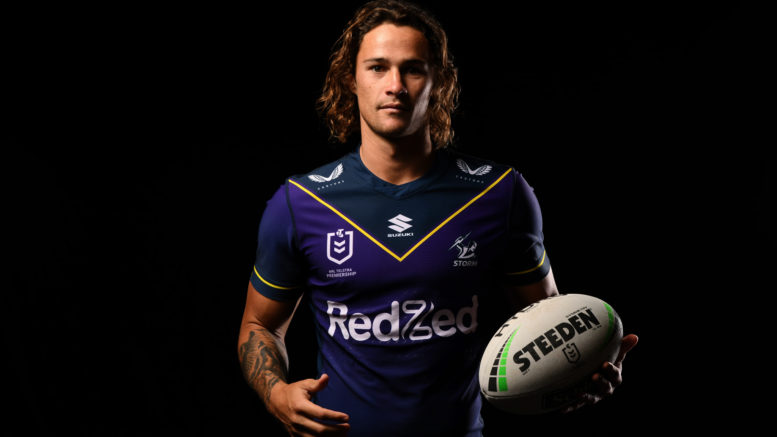 Umina local and new signing for the Cronulla Sharks, Nicho Hynes, has been nominated for the 2021 Ken Stephen Medal in recognition of his work off the field throughout his final year of three with the Melbourne Storm.

The award is sponsored by ‘Your Local Club’ and involves each NRL club highlighting one of their players who has taken extra efforts to engage with the community throughout the season.

Melbourne Storm selected Wiradjuri man, Hynes, for his consistent and high degree of contributions to both club and NRL community programs, in particular, those which involve young indigenous people.

During the Indigenous Round, Hynes spoke at multiple schools whilst volunteering with events and movements within both the Mingaletta Aboriginal and Torres Strait Islander Corporation and the Salvation Army.

Over his three years at the Storm, he has been heavily involved in the NRL School to Work Program that mentors students with personal anecdotes.

During the multiple Coronavirus lockdowns of Melbourne, he continued to send personal videos to the local Aboriginal youth with a focus on combating disengagement from school.

Hynes has also been recognised for his regular commitments to the Starlight Foundation including visits to sick children at Starlight Rooms in Melbourne hospitals.

After almost 10 years with the Umina Bunnies Junior Rugby League, Hynes has recognised the Peninsula-based footy club as his home team.

Having also played for the Woy Woy Roosters and Terrigal Sharks, Hynes started his career with Umina in 2002 at the age of five.

Last playing for Umina in 2011 with the Under 15 As, Hynes then sought out a higher level of play to advance his development as a professional player.

Throughout those nine years with the Bunnies, former Club President, Ken Dyer, witnessed many examples of Nicho’s great potential as both a footballer and a man, having also coached and managed his age group multiple times.

“You could always tell he was going to be a good player,” Dyer said.

“He had a real football talent from the start I suppose, but he was also a quiet spoken young man who helped out a lot at the club during his time.”

“He was always very respectful and had all of those good things you see in young men as they go through being young footballers – and as Nicho moved through to the international level, it was good to see that trait find its way through.

“He is a hard worker too: once leaving the Bunnies, he didn’t just walk in to an NRL contract, he had to move around, play down the grades and work his way up.

“He has had a long career and it is great that he has recognised us as his home club.

“He won our player of the year awards multiple times, he scored the most tries in mini-league a couple of years in a row and ended up with 133 games and about 760 points for the Bunnies.

“Our club is a small club, we’re proud of getting the kids on the park, introducing them to footy and getting them through their junior career, but at some point they have to look to better themselves and that’s what Nicho eventually did.

“Although he played for a couple of other teams in his international years whilst he was trying to forward his football skills, he always ended up coming back to us and I think he has always held the Bunnies close to his heart.

“We have a large Aboriginal and Islander presence at our club and we promote that quite heavily.

“We always rely on the boys as they get older to mentor the younger boys, keep them interested in footy, community, being part of a team and preventing them going down a wrong path.

“He had a senior playing role at our club in his later years and the younger players of the club looked up to him, definitely.”

Twelve other NRL players have been nominated alongside Hynes, with three finalists to be chosen by an esteemed panel while fans will vote to determine the fourth.

In a change from previous years, the player who takes out the fan vote will also earn $3500 for their junior rugby league club.