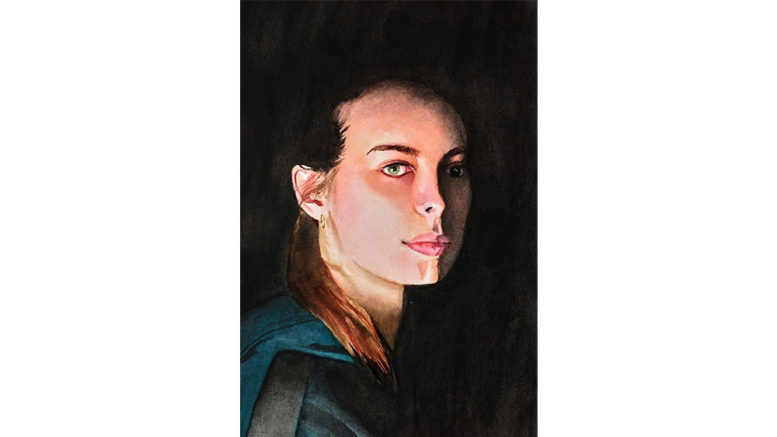 Terrigal’s Allanah Pitcher has been nominated as a finalist for the prestigious Young Archibald Prize for her painting titled Unfiltered.

The self-portrait was submitted for nomination by her mother Melanie, which came as a surprise to the 17-year-old from Terrigal High School as she only found out when the nominations were announced.

Pitcher said the watercolour took her about six weeks of sporadic painting and it was originally created for her Year 11 art assessment.

“I was always hoping to submit an Archibald piece and it just so happened that at that time I was working on this portrait for Year 11 art,” she said.

“For the Archibald, the requirement was to submit a portrait of someone important, so I decided to enter a self portrait to remind everyone that you are important.

“Especially in a world full of anxiety and self-doubt created by the distorted perception of what defines perfection through filters on social media, something that all of my friends agree with.

“With this portrait, I have chosen to celebrate the unfiltered details and gradients of my face through light to embrace my identity with its inherent flaws, like artists of the pre-digital era.”

Unfiltered is one of 10 finalist pieces nominated in the 16-18 years category.

“I was shocked when I found out my piece was chosen as a finalist,” Allanah said.

“It’s on display in the NSW art gallery, and it will be there until September.

“It’s a bit hard; I haven’t had a chance to go down and see it yet due to COVID, but I am quite excited to go down.

“I’ve had a look at the other works in my category and they are all fantastic.”

The winner of the Young Archibald will be announced via Zoom on July 31.

In the 2021 competition, there were over 2,100 entries across four age divisions with 40 finalists and 20 honourable mentions.

Have your say on Terrigal unit proposal