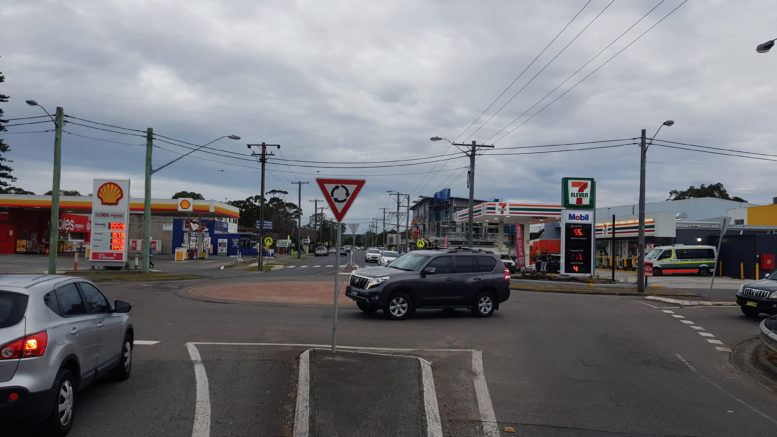 The $32 million upgrade of the Rawson Road and Ocean Beach Road intersection, Woy Woy, may take more than four years to complete, according to the Peninsula Chamber of Commerce.

Chamber President, Matthew Wales, said two $16 million allocations of Federal Government funding had been secured by Member for Robertson, Lucy Wicks, to upgrade the intersection but very few details had been made available by Central Coast Council which is managing the project.

That’s a total of $21.6 million planned expenditure on the intersection over the next four years, $10.4 million short of the promised Federal Government funding implying that it will take more than four years to finish the project.

“Without any exaggeration it is the pivot intersection for the Peninsula; it controls traffic jams in all directions,” Wales said.

“Once they start work that intersection will be chaos for several years,” he said.

“The big delay is relocating services so when you look at that intersection you’ve got high voltage power lines, telco cables, water and sewer mains, and probably other things they don’t even know about.

“I can only imagine that once they start you would need to avoid that intersection.

“It is only a matter of time before something not very pleasant is going to happen down there,” Wales said.

He said the Peninsula business community was astounded by the cost of the project.

“We are struggling to understand why a set of traffic lights has cost so much and despite our repeated requests we have not been provided with a budget breakdown,” he said.

“We were expecting a draft intersection layout plan in June but we have now been told by CCC that that is unlikely until August or September.

“We don’t know what this animal is going to look like or more importantly what impact the new intersection is going to have on access to existing businesses and whether it is going to restrict parking, particularly in Ocean Beach Road as there are a few businesses there who rely on street parking.”

According to Wales the initial pledge of $16 million funding from Member for Robertson, Lucy Wicks, followed some intense lobbying by the Peninsula Business Chamber which placed the intersection at the top of its list of infrastructure upgrades.

“At some point it was realised that wasn’t going to be enough and there was a further allocation of $16 million, so what worries us is why was the cost underestimated in the first place and what prompted the Federal Government to allocate another $16 million baring in mind that the Maitland Bay Dve-Picnic Parade roundabout at Ettalong was only $7 million to complete.

“This intersection is very tight, and we had been previously assured that Council would not require any significant road widening.

“If that is the case, we are all struggling to understand how these traffic lights are going to operate if you can’t provide left and right turn storage lanes.

“What we don’t want to see is the sort of mess we have at Blackwall Rd and Allfield Rd where they had to compromise because they could not provide turning lanes.

“These are questions we have been asking for years and we have never had a satisfactory answer so I fear we might get another very expensive, sub-standard intersection.

“We are working with the transport section in Central Coast Council to understand what works are going to be done and what the budget is and for the moment we are looking forward to the draft plan to see what they are proposing.”