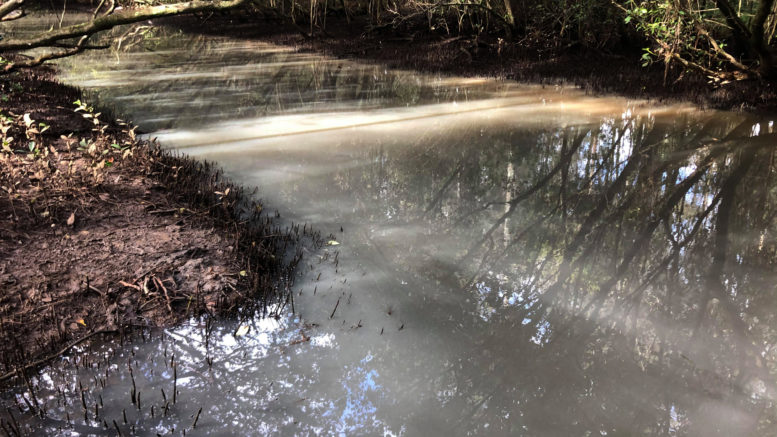 Community activist Cori Hopper, who has been monitoring conditions at the creek for several years, said the company was upgrading its waste water management system in response to a prevention notice issued in October, 2020, by the Environment Protection Authority (EPA).

But he says little has changed, and concrete waste continues to pollute the water way.

“I’ve been pretty quiet on the issue for the last few months in the interest of giving Hymix and the EPA a reasonable chance to sort this out as they have boldly promised they would but about 10 pollution events have occurred since (Hymix was) given the prevention notice and $23,000 penalty,” Hopper said.

“Even more bewildering is that capital works (have begun) and Hymix has not even installed any mitigation measures to stop contamination of the creek while these works are being attended to.

“Some developments in the past couple of months also show that the creek bed itself is so heavily contaminated with four decades of concrete sediment that (there) is roughly two feet of concrete slurry underneath the crust creek bed itself that is not likely to ever disappear according to a water quality scientist we had investigating the matter recently.”

A spokesperson for Hymix said the company undertook interim measures in late 2020 to improve the plant’s water management system.

“Currently, Hymix is constructing a first flush pit onsite which is expected to be complete by the end of July,” the spokesperson said.

“This is in line with the recommendations from the independent water management survey completed last year.

“We continue to consult with the EPA and we are aware of the requirement to ensure that any water leaving our site meets the EPA’s standards.

“To this end, Hymix regularly inspects the creek and its surroundings.”

The fine was issued after EPA officers found evidence of concrete waste water discharging into a stormwater drain on Cochrone St which leads to Kincumber Creek in October last year and comprised  a $15,000 penalty for alleged water pollution and an $8,000 penalty for allegedly failing to properly operate control equipment.

Hymix was also issued with a Clean-up Direction and Prevention Notice to address ongoing surface water management issues at the plant.

“Construction of an additional first flush pit for improved water management was underway at the time of inspection,” the spokesperson said.

“Hymix are aiming to have this work completed by the end of July.

“Officers inspected the stormwater discharge point from Hymix to Kincumber Creek; no discharge was observed.”

Members of the community can report pollution incidents to the Environment Line on 131 555 or info@epa.nsw.gov.au