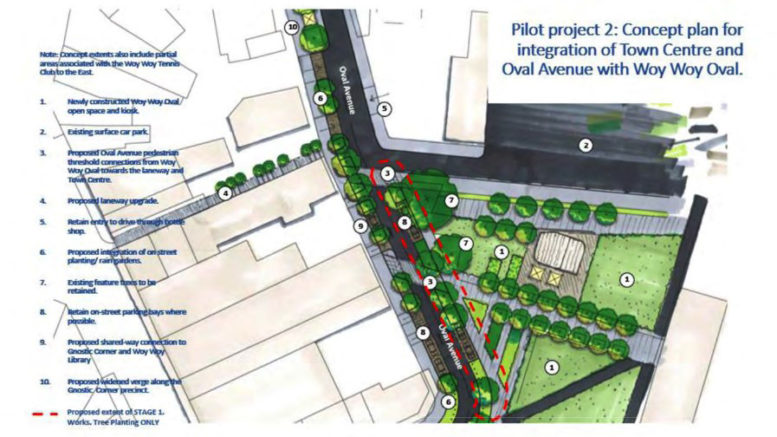 The strategy aims to address the maintenance and management of urban greenspace across both private and public land, with a focus on addressing Urban Heat Island Effects and improving liveability.

It has taken two years to get to the stage where it is ready for adoption but the results of some of the actions will not be felt for 30 years.

The strategy gives an overview of the “heat sink” nature of the Woy Woy Peninsula, which the community has been increasingly conscious of in recent years.

It projects that an increase of canopy cover by 5 per cent will be achieved 30 years after the initial planting.

It names Pearl Beach as one of the Coast’s “unique urban ecosystems” but reveals that the Woy Woy Peninsula has less than 10 per cent canopy cover.

An investigation conducted into changes to tree canopy cover and number of impervious surfaces in Woy Woy between 2005 and 2014 is included in the strategy.

Over this time canopy cover declined by 173 hectares and the area of impervious surfaces increased by 84 hectares and unplantable space by 113 hectares.

“The effect may be difficult to counteract as the area of plantable space only increased by 24 hectares,” the Strategy states.

“Urban Heat Island mapping has shown that on hot days Central Coast’s 10 hottest suburbs are between 3.4 and 5.7 degrees hotter than background level,” it says.

“For example, the forest of Blackwall Mountain is four degrees Celsius cooler than a nearby suburban Blackwall house.

“Between 2013 and 2018 Ettalong became 2.6 degrees hotter than background areas in nearby bushland,

“Over time and unabated the impacts of Urban Heat Island will continue and possibly intensify as a result of continued development intensification.”

There are four framework priorities included in the Greener Places Strategy: enhancing Council’s capacity and capabilities to implement a greening vision across all land tenures; creating liveable places for people to enjoy and increase community capacity to participate in the greening vision; enhance ecological resilience and responding to climate change across the region; and improving value for money alternative transport options such as walking and riding leading to an improvement in liveability, real estate demand, and tourism potential.

The framework priorities are underpinned by 10 guiding principles including that tree retention should be given precedence over removal, native trees and shrubs are preferable to introduced species, and community needs to play a pivotal part in implementation of the strategy.

Actions will be delivered over the next 15 years.

Council considered the draft Greener Places Strategy in July 2019 and endorsed it for public exhibition.

The draft strategy was placed on public exhibition from August 5 until September 5, 2019.

Submissions were received from 41 Central Coast suburbs and suburbs on the Woy Woy peninsula dominated the submissions, with 10 submissions occurring each in Woy Woy and Umina Beach and nine from Ettalong.

The remaining suburbs had four or less submissions but all indicated support for greening activities in their suburbs.

Of the 99 submissions received, 95 included total support, two included partial support  and one did not support.

Those that included partial support suggested that they appreciate the value of trees but wanted assurances that planted trees would be adequately maintained, according to the Council’s report on the community consultation.

“The results show that the community places a high value on providing habitat for urban wildlife,  with a few submitters wishing to increase the number of birds they see in their backyard.

“Others suggested that they had observed a decline in urban wildlife over time.

“Submitters showed a strong interest in the draft Strategy mitigating the Urban Heat Island,  which demonstrates the high level of community understanding of this concept.

“A number of these submitters also believe that the Urban Heat Island in their neighbourhoods is  becoming more severe each summer.

Many submissions also mentioned that the Strategy will mitigate climate change effects, through either reducing heat impacts or through the storage of carbon within trees (Table 1).

“In consideration of the availability of funds into the medium term, actions included in the Strategy have been ranked according to the ability to implement within the current and future resourcing,” the strategy says.

The strategy specifically excludes “bushland or other natural areas or the adequacy of current open space across the Central Coast”.

The strategy builds on from the Greening Wyong Strategy of 2016 and is aimed at “guiding proactive management of public trees such as those located in streets and parks”.