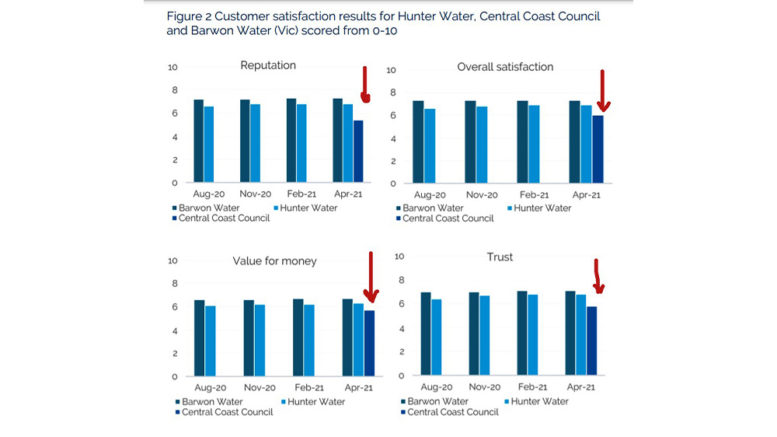 Central Coast Water has been added to an IPART survey of water providers and compared to Hunter Water.

Residents who were surveyed weren’t all that impressed, judging Central Coast Council’s water authority low on trust, reputation, value for money and overall reputation for its water and sewer service.

Neither Hunter Water nor Central Coast Council performed as well as Barwon Water in Victoria.

But it is the first time IPART (The Independent Pricing and Regulatory Tribunal) has surveyed the Coast.

“We have not yet collected enough data on Central Coast Council to draw accurate conclusions about its performance, having only surveyed its customers in 2020-21,” IPART said.

“Customer satisfaction is an indicator of the effectiveness of the utilities’ services.

“It helps protect the customers’ interests, particularly in NSW where the public water utilities largely operate as monopoly suppliers.”

IPART has been surveying Sydney Water and Hunter Water customers since 2019.

“We included Central Coast Council in the Survey in this 2020-21 financial year,” IPART said.

“We survey customers for their views on their utility four times a year.

IPART compared Hunter Water and Central Coast Council’s results with each other’s and with Barwon Water’s results (in Victoria) as the three are comparable in their functions and customer base.