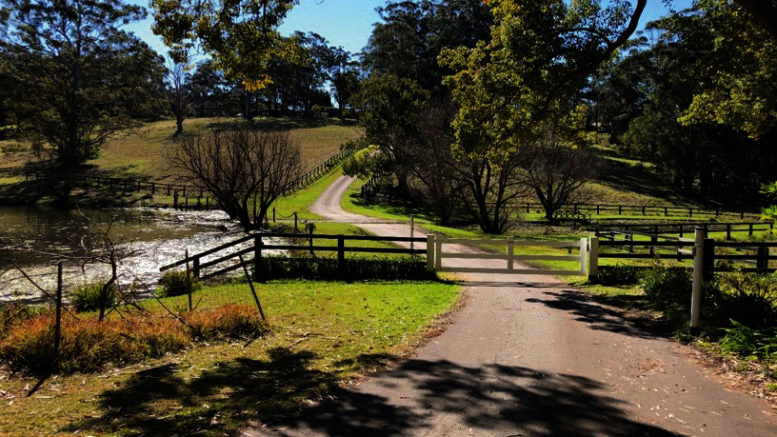 The site of the proposed development

A $20M proposal to allow manufactured homes in a residential land lease arrangement at the former Bangaloe Stud at Picketts Valley has reared its head again.

Residents from Kincumber, Picketts Valley and Avoca Beach lined up to speak at the July 22 Local Planning Panel meeting to review a decision made in August last year to refuse the application.

Landowner, Choice Living Avoca Development, asked for the review to consider amendments including a reduction in sites to 165; relocation of two internal roads and the reduction of trees to be removed from 491 to 327.

Steve Fortey, president of the Avoca Beach Community Association, told CCN that the application contravened the spirit and intent of the zoning for that area.

“To present 165 permanent, manufactured homes in the guise of a caravan park is a smoke and mirrors exercise,” Fortey said.

“The aim of an E4 zone is to retain the ecological values of a property.

“Clearing over half of a 24-hectare property destroys this aim.

“Jamming 165 homes together, most with common walls, is not low density living, regardless of the amount of land surrounding it.”

Fortey said it would set a dangerous precedent for other E4 zoned areas on the Central Coast.

He said Bangaloe stud was a part of the Avoca Lagoon catchment area and a contributor to the runoff that finds its way to the lagoon.

“Saltwater Creek below the proposed Bangaloe development is one of two main sources of sediment-based pollutants of Avoca lagoon,” he said.

“At present a major problem exists with Avoca Lagoon; it is in crisis.

“For the past three years it has had the poorest rating for water quality of all lagoons on the Central Coast and rates in the bottom five per cent for NSW.

“It is sediment and pollutants from the catchment that create a permanent source of poor water quality.

“The Bangaloe site in question has three main dams, each of which stores water.

“Getting rid of two of these dams will see an increase in runoff water needing to be contained.

“Add to this the hard, impervious surfaces of 165 houses, roads and associated infrastructure, no matter how much it is processed; it must add to the flow of water into the lagoon.

“Siltation of an already unhealthy lake will be increased.”

The council recommendation to the panel is that the proposal, as amended, fails to provide adequate justification or additional information to address the reasons for the original refusal.

Council says the $20M plan is an overdevelopment and is inconsistent with the current and future desired character of the locality.

“The proposal to construct dwelling houses on site will not result in the homes being relocatable as they will be fixed on site,” Council said.

“This is therefore not a caravan park or manufactured home estate.”

Reasons for the original refusal included: the proposal being inconsistent with the objectives of the E4 Environmental Living zone; stormwater run-off and increased downstream flooding; and impact on the ecological values, visual and scenic quality of the area.

The panel said last year that the site was not suitable for the proposed development due to its landscape, scenic and ecological qualities which should be preserved.

The panel’s decision should be known early next week.