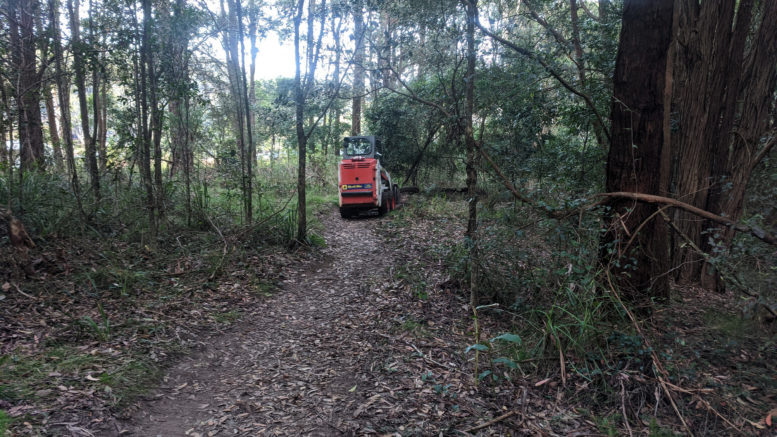 A bobcat working on the trail in Bradley's reserve

Central Coast Council has committed to working with the mountain bike community to maintain the sport in a sustainable way following backlash over its recent unannounced removal of a number of trails and jumps in the region.

A Council spokesperson confirmed a “number of unauthorised trails and structures” at North Avoca, Copacabana and Saratoga had been removed in recent weeks.

“These were made up of jumps and structures consisting of imported soil, timber, tyres, corrugated iron and general rubbish,” the spokesperson said.

“Walking trails have been retained and the public are still able to access these for passive recreational activities like bushwalking.

“Access through these reserves for the broader community has been enhanced and made safer by removing jumps and other hazards.”

The spokesperson said works at North Avoca and Copacabana were prioritised due to “direct impacts to threatened species and Endangered Ecological Communities” and that qualified bush regenerators had undertaken works at the sites to “restore natural landforms and mitigate erosion impacts”.

The move received a tick of approval from the Central Coast Branch of the Australian Conservation Foundation, which praised Council for “actions to remove illegally created bike jumps in Coastal Open Space System (COSS)”.

“We support enjoyment of the great outdoors and engaging with nature and have no objection to mountain bike riding on legally designated fire trails in COSS, the group said in a media statement.

“However, many in the community object strongly to these bikes being used off these trails causing environmental impacts.”

But Central Coast MTB Trail Alliance member, Jonathan Curtis, said demolition over the past few months of dirt jumps on various trails around the region without any prior warning or consultation had upset the Coast’s many mountain bike riders.

“Recently we have seen bobcats demolishing jumps at Saratoga, Copacabana and Forresters Beach which are largely used by young children in those communities,” he said.

“That trail has been in use for 20 years or so and was kept in good condition and environmentally maintained,” he said.

“Stabilising vegetation had grown up around it.

“In removing the jumps, Council also removed much of that stabilising vegetation and widened the trail, which is not good for the community or the environment.

“The conservation act which protects Bradley’s Reserve and was initiated in 2013 provides for the maintenance of existing trails.

“So if there were properly identified environmental impacts resulting from the trail, professional trail builders should have been engaged and options to modify the trail and improve its sustainability should have been explored, rather than the destruction/removal that has occurred.”

Curtis said use of mountain bike trails had ramped up since COVID restrictions were first introduced.

“We are about cultural and sustainable engagement with the bush, but we are often mis-characterised as environmental vandals,” he said.

Shadow Minister for the Central Coast, David Harris, said with a “poor PR profile in the community”, Council should be “extra vigilant when dealing with contentious issues”.

“The mountain bike community already feels left out of the consultation process,” he said.

Parliamentary Secretary for the Central Coast, Adam Crouch, said he was a strong supporter of the Coast’s mountain biking groups and was pleased the bulldozing had been paused.

“I believe there are not enough mountain biking opportunities and facilities in our region, and I have been working with David Harris to address this,” he said.

“Mountain biking poses a very low environmental risk so all types of land including national parks, state forests and COSS should be considered.

“It was completely thoughtless for Central Coast Council to bulldoze and destroy the mountain biking track near North Avoca without any community consultation.

“This is a track which local kids have treasured and taken pride in for decades.

The Council spokesperson said that while the works had been carried out “for good safety and environmental reasons” it acknowledged that prior notification of the works had not been undertaken and apologised for that.