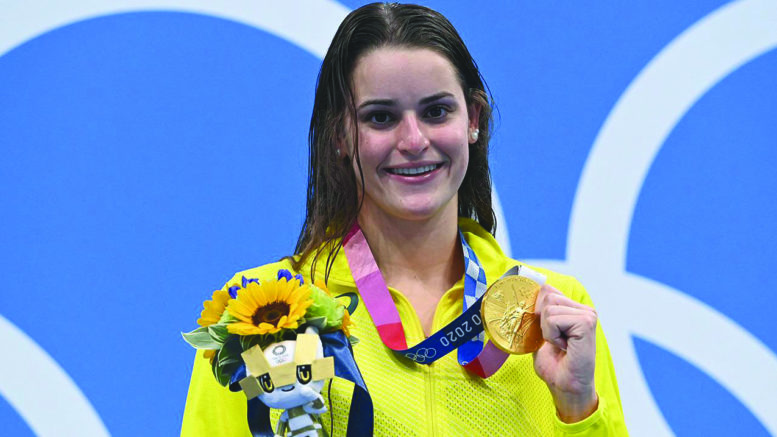 At the close of Tuesday, July 27, the official ‘Day Four’ of the Olympic Games came to an end, despite being the sixth day of competitions wherein Australia has so far earned nine medals, including three gold, one silver and five bronze.

Bronze came first for Australia through Queensland’s Brendan Smith in the Men’s 400 metre Individual Medley on Sunday, July 25, with two further third placements to come on the following day.

Australia’s one silver so far was won by Jack McLoughlin in the Men’s 400 metre Freestyle on Sunday, only an hour before our first gold medal won by the Women’s 4 x 100 metre Freestyle team of Bronte Campbell, Meg Harris, Emma McKeon and Cate Campbell.

The following day, Australia’s second gold came for Ariarne Titmus in the Women’s 400 metre Freestyle, a slight upset against favourite, Katie Ledecky from the USA – who ended up coming second.

The win required a colossal effort from the Olympic debutant to Aussie Crawl from behind and overtake Ledecky’s lead throughout the final 100 metres, finishing 0.67 seconds ahead with 3:56.69.

It was a final dash that inspired the most enthusiastic crowd celebration at the games so far, one coming from Titmus’ own swimming coach, Dean Boxall, who has found himself something of a world-wide internet sensation after his Ultimate Warrior inspired expression.

On Tuesday, three further medals came for Australia, firstly with gold back in the swimming pool for Kaylee McKeown in the Women’s 100m Backstroke.

Starting back on Day Two, the surfers experienced messy conditions all the way through with a strong onshore wind and short period storm swells combining to create small and close together waves.

After falling to gold medal winner, Italo Ferreira from Brazil, in the semi-final, Wright clinched the third place win with a two wave best of 11.97, ahead of Medina’s 11.77.

The final medal on Tuesday came to Jessica Fox in the Canoe Slalom, making her a triple Olympic medallist after receiving a silver at London 2012 and bronze at Rio 2016.

Racing last in the Semi Final, Fox won with a final time of 105.85 only hours ahead of the Grand Final.

On Tuesday, other notable results came for Australian Matt Wearn in the Men’s One Person Dinghy Sailing and the Australian Water polo team.

Waern is currently ranked second behind Cyprus’ Pavlos Kontides after a second-place finish in Race #5, with four more races to come before the final.

The Water Polo team made up for their loss against Montenegro with an 11 – 8 win over Croatia, placing them at second place in Group B with three more games to go.