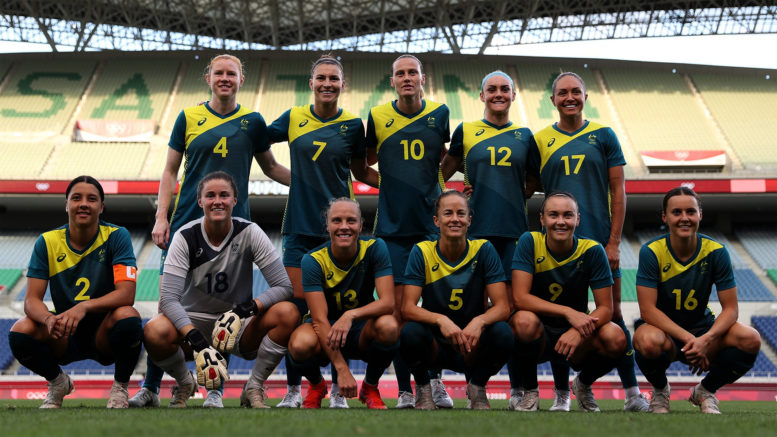 The Men’s and Women’s Olympic Football Tournaments are well underway, and both the Matildas and Olyroos have had success and failure in the opening two games of the group stage.

Wamberal’s Ellie Carpenter and Tacoma’s Kyah Simon started in the Matildas’ opening 2 – 1 win against New Zealand on Wednesday, July 21 and in their 4 – 2 loss against Sweden on Saturday.

Terrigal locals Lachlan Wales and Kye Rowles both made Olympic debuts in the Olyroos across two matches, first in an upset 2 – 0 win against Argentina on Thursday, July 22, and then in a 1 – 0 loss to Spain on Sunday.

Kyah Simon was formidable in attack for the first 75 minutes of the game against the Kiwis, most notably making the second to last pass to Sam Kerr, who assisted Tameka Yallop in scoring the team’s 20th minute opening goal.

Kerr went on to score a second in the 33rd minute with a header from a corner, crossed in by

Carpenter played with confidence in the right back position all game, making runs forward with

precise crosses into the penalty area.

In the 65th minute, she prevented a certain goal by cutting out the final pass after Aussie keeper, Lydia Williams, was left absent from goal.

Despite a strong performance throughout the entire 90 minutes, she made one final loose pass that

led to a conceded goal in second half injury time.

Three days later against Sweden, the Aussies were pushed all game by the team who had beaten the USA in their opening game, 3 – 0.

The first goal came in the 20th minute to Sweden’s Fridolina Rolfo after a grounded cross by Sofia Jakobsson was left in the penalty area to roll to her feet.

Sam Kerr again showed her leadership in response, scoring a headed goal in the 36th minute after a goal line technology check was required to confirm that the ball had travelled just beyond the clasp of Hedvig Lindahl, Sweden’s keeper.

Simon executed the crucial cross that Kerr pounced upon, curling the ball across goal and into the penalty box with an inside foot strike.

With the scores level at half time, it was the Matilda’s who were first to break the deadlock, with Kerr scoring her competition fourth in the 48th minute.

It was another header, benefitting from Caitlin Foord’s slow but deft cross over Lindahl in goal.

The game would be Sweden’s in the end, with three unanswered goals coming for the Scandinavians between the 52nd and 82nd minutes of the match.

Two further scoring opportunities to score fell for Kerr, firstly with a penalty shot and then a one on one shot against the keeper but she was unable to put them away.

This perhaps reveals an encumbering dependence within the Matildas squad on their captain, Sam Kerr, one which they needed to account for ahead of their final group stage match.

This was to be played against the USA on Tuesday evening, July 27, who defeated New Zealand 1 – 6 on Saturday evening.

The match against USA had turned into a play off for second place, with America currently sitting ahead of third-placed Australia due to goal difference.

For the Women’s conference, the top two teams from each group will automatically qualify, with the next two highest scoring teams – in their group standings – also moving on to the Quarter-Finals.

Meanwhile the Olyroos caught the eye of the world in their opening match against Argentina.

Two assists came from Duke, each delivered to scoring teammates who were called into the squad late, first Wales, then Melbourne City’s Marco Tilio.

The first one wasn’t exactly part of his plan, made via a deflection on Joel King’s low cross that ended up being put away by Wales in the 14th minute.

Much later in the 80th minute, a second goal came for Australia with Duke’s incisive run along the side, preceding a light pass to fresh substitute, Tilio who – first touch – curled the ball beyond the outstretched gloves of Argentinian keeper, Jeremias Ledesma.

The match has been one of the largest upsets at the Games so far, and it allowed the Olyroos to momentarily top Group G: this tournament’s Group of Death.

However, with a 1 – 0 defeat suffered against Spain on Sunday evening, July 25, the group lead did not last.

It was a tight, even contest throughout most of this match, despite Spain posting a bigger threat on goal with six shots on target against zero for the Aussies.

With 27 minutes of play left Kye Rowles was given a run, the scores still rested at zero.

In the end, an 81st minute goal to Mikel Oyarzabal was the decider, scored by a pinpoint header into the bottom corner after a cross from Real Madrid’s Marco Asensio.

Entering the Olympics after playing for Spain’s first tier domestic team, Asensio’s high, receding lob into the penalty box was well placed to loom near over Rowles’ head, who attempted to meet the ball before it crossed Oyarzabal’s brow.

The Olyroos are now positioned second in Group G on three points, ahead of Argentina on goal difference, behind Spain on four and with Egypt fourth on one.

The final group stage matches on Wednesday, July 28 will decide the outcomes going into the Quarter-Finals, with only the top two teams from each group making it through.

The Olyroos require only a draw against Egypt to ensure a final Group G placement of second, whereas a win could see them finish first, so long as Argentina win against Spain but do not overcome a two goal deficit.

Both Australia v Egypt and Argentina v Spain will be played at the same time, commencement at 9:00pm AEST.