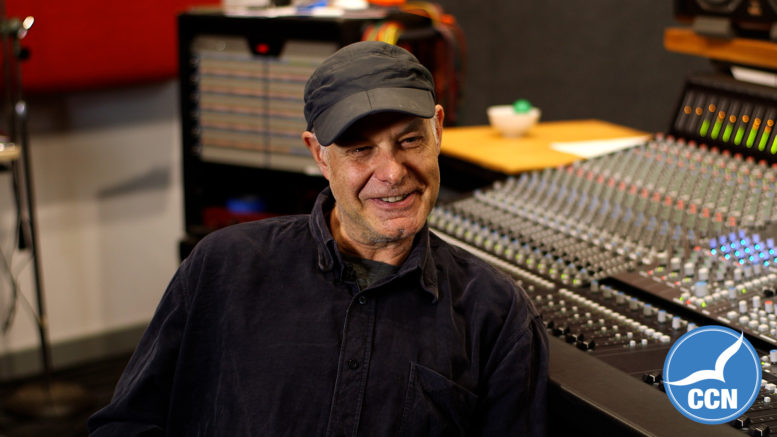 I’ve made my way over to the industrial estate in West Gosford, down a side alley to an unassuming warehouse. I arranged a pre-lockdown visit to a music industry veteran Marshall Cullen. Inside sits a music studio which has been established over 35 years in various locations, from Ultimo to Balmain to now the Central Coast, Damien Gerards Studio.

DG’s is one of the oldest, continuously operating recording facilities in Australia and has recorded some of the best in the Aussie game, such as, INXS, Silverchair and Grinspoon.

The studio manager, Marshall Cullen, has been an integral part of the studio, building it up for many years. A 30+ year industry veteran, both locally and internationally, Marshall covered many areas of the music industry, from record production to management, A&R, Marketing, Live Touring & Recording to international releases, music publishing and film synchs.

Marshall and I sit down in the mixing room, next to a one of kind SSL desk to have a chat.

Marshall started out young in Tasmania, he would sit down and figure out arrangements to songs, and so quickly developed an appreciation for sound. Not really taking a liking to piano on guitar he found his strengths in being behind the scenes, setting up stages and engineering live sound.
Marshalls favourite music to work with.

“People tend to hang on to music they heard in their mid to late teens. For me it’s the 60s and 70s, Beatles, Stones Dylan, Frank Sinatra, Elvis. But I grew up mixing 80s music, Little River Band, Hudugurus, which I still manage and The oils.”

“The really big difference between digital and analog is taking the audio part and turning it into zeros and ones, so it’s taking away the electronic part and becoming a digital file.
Analog was a direct electrical reproduction of what was going on with the microphone, whereas digital takes that source and turns it into zeros and ones.

Its better than tape coz there’s no noise, but there’s certainly something about recording on tape, especially for musicians, the sound it makes in comparison to digital, its a major reason vinyl has made a comeback, is because of the sound”

Marshall and I discussed the similarities between old films and old music equipment. There’s a different connection happening with viewer and the art piece that has been discussed in depth. Digital simply doesn’t light us up the same way as 16mm films and tape recordings for music.

With the digital revolution, I asked Marshall if he felt talent had been diluted since everyone is able to edit out mistakes so easily.

“I don’t think its diluting, it’s just talent finding in a new way. In the past you really had to earn your chops and be amazing on the instrument, now everyone has access and that’s a good thing, so potentially there’s stuff coming out from people that it would of never had happened before”

“Even the term producer has changed. That used to be the guide who oversaw the whole project, now producer means a guy in his bedroom making the track. So I think the entry point is much lower than it used to be, so yes that leads to a lot of mediocre music, but not everyone’s going to get signed, so there’s still that filter, but it means an artist can come out of nowhere. You can have a Tash Sultana appear without a record label”

Damien Gerard studio is a company name from two brothers who setup the original studio space.
“I joined the team in 85 with another guy from Tasmania and I finally got to have this massive playground, taught myself engineering. I had vision to take it from a demo studio to a full recording studio, and we achieved that by 92.”

When they eventually came to the Central Coast studio, they did 4 loads in a 3 tonne truck over the school holidays one year.

The brand new SSL original consol, a legendary consol from the 80s, is the only one in Australia. Marshall explains “They’ve upgraded on the original by incorporating the classic eqs but also having modern parts. They’ve put it all together in this package, a modern meets vintage desk and they’ve built all by hand.”

Vintage tubes, preamps and mics also sit around us. “The microphones are the source of everything, the AKG’s, Neumans, all the ones that you see typically in the 60s onwards.”
The studio also has engineers and producers filled with knowledge, which only adds to their tool belt.

The remainder of our conversation was about authenticity and the future of music.

The only thing left for people to play with, or are aiming for is, making music with robots or have robots make music.

Marshall thinks digital should be a tool and that’s it, Put the breaks on, that’s one of the things he doesn’t like about the direction of new music.
“Natural singers now sound robotic naturally, even before you put on the affects.”

Ellen: What kind of music do we need now?

“We need music that makes people feel good, rather music that brings them down.
Music that people can connect too.
As soon as I hear that robotic voice, I can’t get into the lyrics.”

We discuss how there seems to be, way less revolution songs.

In the late 70s early 80s an Artist in Australia could live in a squat and survive. Now there’s no squats, you can’t survive, you’re just a homeless person. There was more space for creativity in people’s lives.”

“There’s more media control. People are staring at their screens and those screens can be controlled. Media has become so much more powerful. There’s a good side to it, you get to know if bush fires are close to you, but like any tool, it has the potential to be misused. Powerful media companies can’t help themselves, there’s the market, we can just press these few buttons.”

Marshall encourages, despite what’s going on in the world, musicians to be daring with their songs and power.
“Someone like tones and I, you might have this homogenous stuff that gets you to a place, but when you get there with all that reach, that listening audience, use it to say something”
Like the Beatles did, they started out with ‘I Wanna hold your hHand’ and then came out with sergeant pepper.

To book in with Damien Gerard Studios and meet Marshal, head too the website.