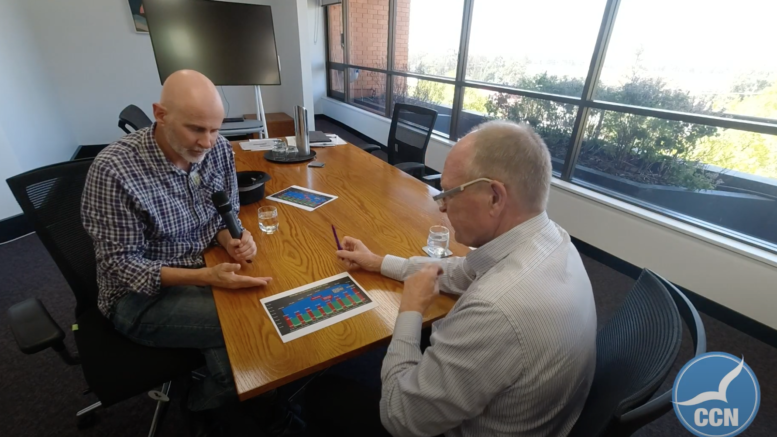 Rik Hart (right) explaining some of the financial challenges to CCN's David Abrahams.

Central Coast Council will need to factor in another restructure in three years’ time if it is not allowed to keep its rate rise permanently in the budget, Administrator Rik Hart said this week.

And that could potentially mean a further reduction in staff and services.

“Effectively we have advanced warning that we could be losing $25M out of our budget once the rate rise is removed, this would also put us in breach of our agreement with the bank that supplied the $100M loan,” Hart said.

In May this year, the Independent Pricing and Regulatory Tribunal (IPART) granted Council a three-year rate increase of 15 per cent.

“Effectively, IPART could take that increase away, because it is for three years only,” Hart said.

“Just as the Council lost money when IPART took away the water and sewerage income of $38M in 2018, I now need to budget for a loss of $25M a year at the end of three years.

“A loss of income was certainly not enacted upon or planned for when this first occurred and I will ensure we will not be placed in that same position again, therefore planning needs to commence now.

“The last Council did not react quickly enough to losing that $38M from its water authority.

“It is not prudent of me or any Council in the future to operate in the same way and to just cross our fingers and hope we are going to keep the money.”

As well as the rate rise, the Council embarked on a financial plan that included reducing staff, reducing costs, identifying surplus land for sale and signed a $100M loan late last year to reduce council debt.

“I need to convince the community that we need to maintain the 15 per cent for the life of the 10-year long term financial plan,” Hart said.

But in the meantime, Council must start planning now for that potential loss.

This means Council cannot start any new projects (excluding those in the current operational plan) and has to plan for another restructure.

“Losing the income would mean the Council would now need to budget to save $30M over the next two years in order to be able to have the facility to downsize the organisation, pay out staff through a restructure, including additional service reductions should IPART not allow a continuation of the rate for the remainder of the 10 year long term financial plan” Hart said.

Two weeks ago, Hart called on the political leaders to support his call for the rate rise to become permanent.

None came out in support.

Hart said they were choosing to not understand.

“Elections are coming up, they are taking the easy approach that they don’t support a continuation of those rates but effectively that is restricting Council from moving forward,” he said.

“If they had their governance hats on, they would say we can’t take the risk.

“It is what the previous Council failed to do, it didn’t act soon enough to manage the loss of the water and sewer revenue.

“The rates stream is now in place and we are only talking about keeping it going in accordance with the 10-year long term financial plan.”

Deep trauma on victims and pets that survive dog attacks

2 Comments on "A Plan B needed if special rate variation is not extended beyond three years; Hart"