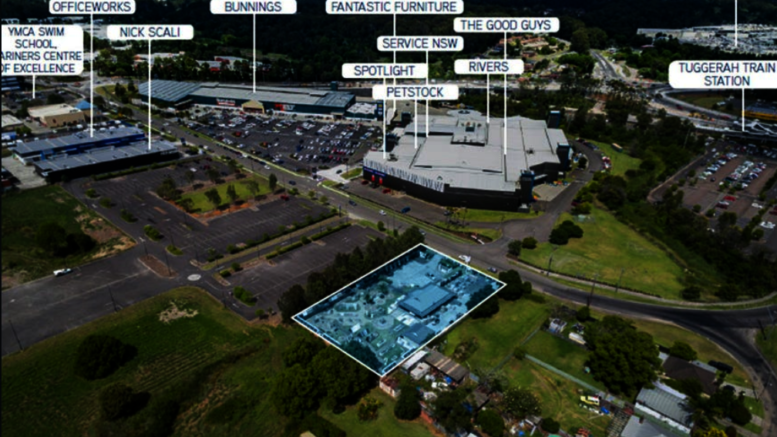 It was a unanimous decision of the Central Coast Local Planning Panel to defer a $30M project in Tuggerah to give adjoining owners, who previously had not been notified, a chance to put in a submission.

When the Panel met on June 24, it heard from owners of the adjacent Austral Bricks site that they had not been officially notified and had only heard days before from a residential neighbour.

Other speakers, Wendy and Chris Lewis, who have lived in the area for 30 years, talked of their concerns about flooding on their properties.

Aventus Tuggerah Pty Ltd is planning to invest about $30M into the east-side Tuggerah precinct by establishing a retail and food/drink complex on its property at 2-11 Bryant Dr, Tuggerah.

This proposal is one of three major commercial developments in that area, along with a $34M upgrade at the railway station, including a new commuter car park for 220 vehicles.

Fiducia Group’s plans to subdivide 25-27 Bryant Dr for a mixed use industrial and warehouse development are still being assessed by Council, and the Mariners’ Centre of Excellence on the corner of Bryant Dr and Wyong Rd is planning to submit a development application (DA) soon for major expansion.

Aventus’ DA (530/2019) is to develop its 5.584ha block, which is currently an overflow car parking and a Return and Earn recycling collection point, opposite Bunnings and the Super Centre.

Aventus wants to develop specialised retail premises in three buildings totalling about 10,000sqm, with a café in one, as well as two separate food and drink premises with attached alfresco dining.

Even though the area is transitioning to business and light industrial, there are houses along the boundaries which have been there well before the rezoning.

Nearby residents, Chris and Wendy Lewis, said their biggest issue was flooding.

“We have put in submissions twice for this development, but nobody seems to be listening,” Mrs Lewis said.

“We’ve lived in this area for 30 years and have seen what the flooding does.

“The most recent water management plan doesn’t currently address draining our properties or getting the water away from any of the existing properties,” Mr Lewis said.

They claim the properties at 1, 3, 5, 7 Lake Rd and 13 Bryant Dr will be affected if proper flooding measures are not established.

Representatives for owners of the adjoining Austral Bricks site at 19-21 Bryant Dr also have a problem with Aventus’ drainage plan for floodwater, they told the Panel.

“We’re not necessarily against development of the land, what we’re against is that the proposal is to redirect floodwaters through our site,” Mr Ryder said.

“On the northern boundary of Aventus’ site and our southern boundary there is an open drain which is proposed to be made into a roadway.

“Why that would not be made into a drain to take the water that’s proposed to accumulate in Bryant Dr is just beyond me.

“Instead, it’s presumably piped but to go across our property as we’re designated in the ADW Johnson report as being catchment for culvert,” Mr Ryder said.

A representative for ADW Johnson, who prepared the Statement of Environmental Effects, said at the meeting that this was not the case, no water was being forced that way and it was not proposed to use number 19-21 as an overland flow path.

Aventus has submitted a Flood Impact Assessment Report which details how the development intends to manage the overland flows.

Mr Ryder said no real flood study had been done, there was no proper survey of flood levels and none of that information had been provided.

“Our concern obviously is that we’re the most affected property in all this and as we did not receive notification of the DA, we haven’t had an opportunity to make a formal submission,” he said.

The Panel deferred the matter so Council could notify all adjoining owners and to allow time for submissions to be prepared.