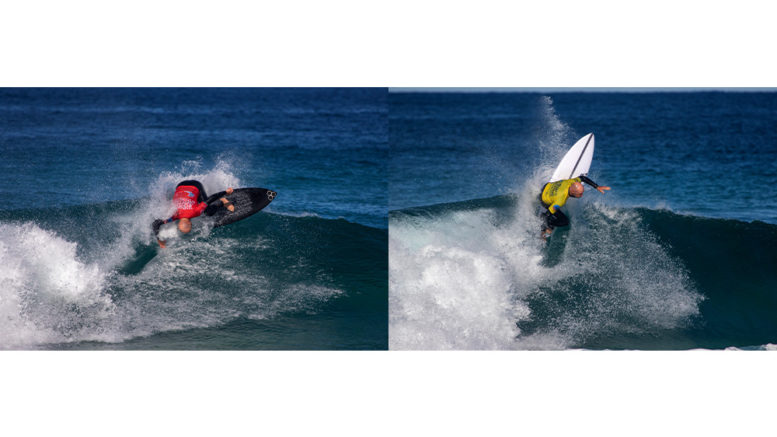 At this year’s Volkswagen NSW Surfmasters Titles, hosted at Boomerang Beach, two northern Central Coast surfers have come away with podium placements against some of the State’s best surfers 35 years and up.

The tournament was held over four days, with over 150 competitors battling it out for the NSW shortboard title and a spot in the national titles at the 2021 Australian Surf Championships.

In the final of the Men’s Over 45, Sharpe got away to an early lead with a 6.33 wave on his first attempt.

A following 6.43 score on his fourth wave put him well into the lead.

However, event winner, Dan Dignam from Woonona, came back to steal the top spot with a handful of decent snaps, first earning him a 6.27 score on his fifth wave and then a top scoring 6.90 on his seventh and final attempt.

The following heat was the Men’s Over 50 final, the last heat of the day, wherein Myers also found the lead early through a dominant first wave of 7.00 before Michael Callender of Woonona took the lead with a second wave of 7.83, the heat’s top scoring wave.

Unfortunately for Myers, he could not repeat his early finesse, with his second highest wave scoring at 4.77.

Jay Mckenzie of Cronulla took out the win in the end after a consistent showing that earned him a two-wave score of 14.10, ahead of Callender on 12.50 and Myers on 11.77.

This was the tenth year in a row that the NSW Surfmasters Titles were held in the Great Lakes region; a wise choice of venue which produced a rise in swell to create the perfect blank canvas on this final day.

At the awards ceremony, there were smiles all round from these mature surfers who showed the State that their later career surfing prowess is a slow burning match.