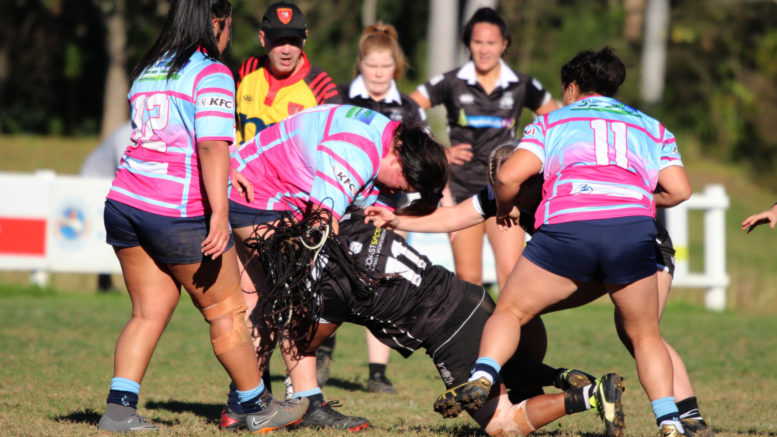 The Ourimbah Razorbacks hit out against the Warnervale Cats in the Women Tens, Round Nine

In the final round of rugby before the June long weekend break, a number of strong wins for the northern Central Coast clubs have repositioned the leading men’s and women’s tables.

In the Women’s Tens competition, a strong win for the Warnervale Cats over local rivals has earned them five points and pushed them within one point of breaking into the top four.

Playing against the Ourimbah Razorbacks on Saturday, June 5, a classy showing from the Cats saw them walk away with a 31 – 12 win.

From the kick-off, the Warnervale women were strong off the mark, with Captain, Danielle Theron, scoring first.

It was a slow start from their hosts, who struggled to maintain possession despite showing great determination in their scrum strength.

The set pieces of both teams were clinical, but it was Warnervale who dominated throughout the first half.

In the second playing period, a few injuries for the Cats gave Ourimbah the opportunity to fight back.

They scored two great tries to reach their total tally of 12 points, but it was not enough to turn the tide.

In the eyes of Warnervale Women’s coach, Nissy Manukia, an intense beginning was quickly capitalised upon by his team who are getting stronger in executing the game plan.

“We told the girls to stick to the game plan and not worry too much about the opposition, instead to focus on what they were doing, let things fall into place, and that’s what ended up happening.

“We knew Ourimbah would come out and play at 120% and so it was a bit of a struggle in the first five minutes.

“After a few tries, things settled down and by the end of the first half we had taken charge of the match.”

Later that day, the Warnervale men played against the Razorbacks in the Swietelsky Premier One where they again came out second best in their search for the season’s opening win.

Although finishing 35 – 8, it was a very even struggle early on in the game.

After securing the early lead but being forced to hold on to it tightly for most of the first half, the Razorbacks scored a late first half try to go into half time ahead at 14 – 3.

A try a-piece early on in the second period brought the score to 21 – 10, but two late tries for the hosts took the game beyond the Cats and secured the bonus point.

While the Cats remain wooden spoon, the Razorbacks have shot back up into second place, ahead of Kariong who rested on their bye-week.

Elsewhere on the Coast, the Swietelsky game of the day was played at Heazlett Park, where the Avoca Sharks were host and losers to The Lakes, end score 40 – 34.

In this high-scoring, see-sawing match, it was not until the final quarter that there was any clue on who the victor might be.

Avoca started the match strongly and were able to cross for two early tries to take an unanswered 12 point lead.

Although laying the early foundations for the win, The Lakes undid these efforts with two of their own tries in response, pushing themselves ahead by 12 – 14.

From here, the lead changed a further four times throughout the 80 minutes.

A penalty goal put the Sharks ahead, before a second half try re-established the Lakes in front, followed by a responsive try for Avoca, then a strong forward surge from the visitors resulting in 21 unanswered points.

With ten minutes to go, a display of poor discipline from the Lakes resulted in two yellow cards being delivered to them, and Avoca took the opportunity to post two more tries, the last coming after the final whistle.

Although falling short, the hosts won’t be too disappointed after being rewarded for their final two tries with two bonus points, one for try count and the other for reaching within seven points of the winners.

For the Lakes Head Coach, Marshall Hemopo, the game was a big test wherein his team’s strengths and weaknesses were exposed.

“I think we still have a bit of laziness in technique which is an issue and we can’t be doing it throughout the rest of the season,” he said.

“We need to always be playing 15 against 15, otherwise it’s going to make it really hard on the boys out on the field playing a man down.

“However, one weird asset we showed that day was our unpredictability.

The Central Coast Rugby Union will now take a week off for players of all clubs to lick wounds and re-focus while the Country Championships take place.

Gosford revival foiled by late penalty to The Lakes