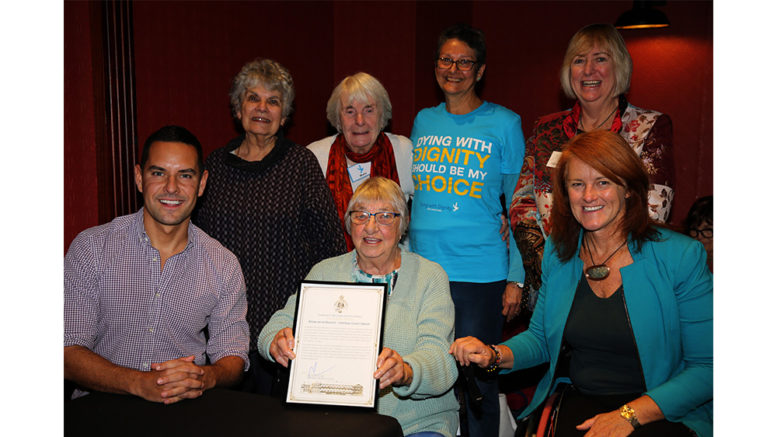 Supporters of voluntary assisted dying (VAD) law reform came together at Central Coast Leagues Club on May 21 to mark the 25th anniversary of the Central Coast group of Dying with Dignity NSW and to recognise the contribution of long-time coordinator, Dr Beverley Symons.

Keynote speaker for the event was Member for Sydney, Alex Greenwich, who is currently in the process of drafting the NSW Voluntary Assisted Dying Bill due to be released in July and debated later this year.

Many of those present have lobbied for the law reform for decades.

Greenwich presented Symons with a framed copy of the Community Recognition Statement which he had read out in Parliament a few weeks earlier.

“I would like to commend the Central Coast Group of Dying with Dignity NSW for their dedication and hard work over 25 years in raising community awareness of end-of-life issues including the need for voluntary assisted dying laws,” he said.

“Through persistent lobbying, educational and social activities … the Central Coast Group has been able to convince politicians, and aspiring politicians, from all major parties, that to represent their constituents on the Central Coast, they must support the rights of the terminally ill and support voluntary assisted dying law reform.

“For a number of years now, the four Members who represent the four electorates on the Central Coast have publicly expressed their support for law reform.”

MPs David Harris (Wyong), David Mehan (The Entrance) and Adam Crouch (Terrigal) were unable to attend but Member for Gosford, Liesl Tesch, announced she would be happy to be a co-sponsor of the proposed legislation.

Tesch said members of her community have been expressing the importance of voluntary assisted dying law reform since she was first elected in 2017 but she also has a personal perspective on the issue.

“Experiencing the passing of both my Mum and my Dad in recent years further emphasised the importance of Voluntary Assisted Dying legislation, with all the appropriate safety precautions, as a very important choice for people during their end of life,” she said.

Dying with Dignity NSW Vice President, Shayne Higson, thanked Symons for her years of service before she handed over to the new coordinator, Dr Stephanie Short.

“These dedicated advocates have seen a number of VAD Bills fail in the NSW Parliament over the years but there was a tangible feeling of optimism in the room on Friday,” Higson said.

“With voluntary assisted dying laws having already passed in Victoria, Western Australia and Tasmania and likely to pass in South Australia and Queensland in the coming months, many advocates believe success in NSW is inevitable.

“We need to make sure that every MP in the NSW Parliament, upper house and lower house, understands the need for voluntary assisted dying laws and the huge levels of community support.

“When Alex announced his intention to introduce a VAD Bill in December last year, we started a petition calling on members of the NSW Parliament to work collaboratively on the Bill.

“That petition has now reached 50,000 signatures.”

Greenwich is working with members across the political spectrum on finalising the legislation.