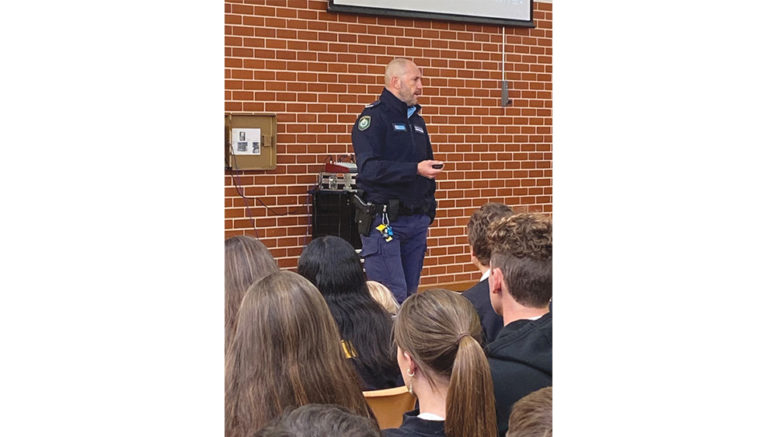 Students from Tuggerah Lakes Secondary College, Tumbi Umbi Campus, were visited by Senior Constable Ryan Hall on May 18 to learn about a variety of issues facing young people across the country.

Each grade received a tailored discussion from Snr Const Hall about issues such as vaping, drugs and alcohol, safe partying, physical violence and cyber safety.

The initiative is part of TLSC Tumbi’s approach to talking about these topics, with teachers, wellbeing staff and support staff all conveying the same message to the students.

“The topics of these discussions change depending on the year group,” said TLSC’s Head of Wellbeing, Russell Stefans.

“We also discussed physical violence, particularly the one punch culture and domestic violence.

“Cyber Safety was also a point of discussion where we talked about how the internet works and digital footprints and the misuse of social media.

“It is an aggregated approach, Snr Const Hall is conveying a message which is being amplified by teachers, wellbeing staff and other support roles.

“He is a police presence in the school, some of our students have a negative relationship with the police and having Snr Const Hall in the school redefines that relationship,” Stefans said.

The school is planning to have talks to the students with Snr Const Hall more frequently throughout the year to engage the students instead of just one talk a year.

One of the largest issues in schools currently is vaping, said President of Central Coast Council of P&Cs, Sharryn Brownlee.

“For students it has become a trendy thing, and there is a lot of peer pressure around joining in.

“Schools are doing the best they can to control it, but often it is happening at bus stops in the morning and the afternoon, and to and from school,” Brownlee said.

Vapes or e-cigarettes were created to help chronic smokers quit by offering an alternative to tobacco products, whilst still providing users with the highly addictive nicotine.

Instead of being filled with tobacco, they contain flavoured juices that are heated up by a coil which turns the liquid into a vapour.