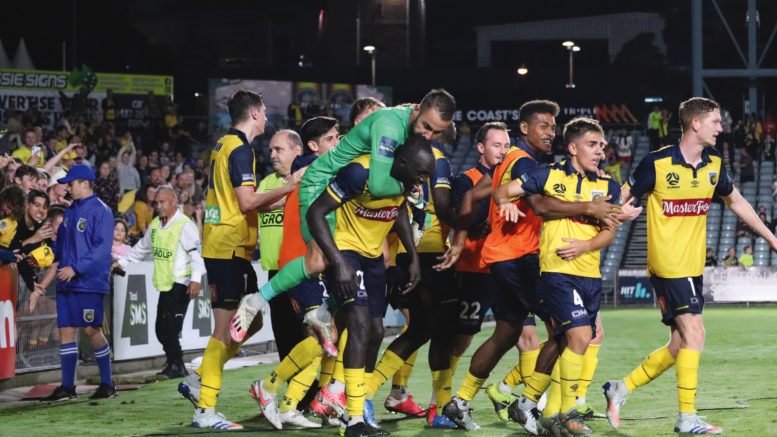 Mariners great Matt Simon has signed a one-year extension with the club that will see him play on for the A-League 2021/22 season.

The club’s all-time leading goal scorer, Simon had one of his best individual seasons on 2020/21, scoring 10 times and assisting another three goals as he formed a formidable partnership up front with Costa Rican Marco Urena.

It will be Simon’s 12th season with the Mariners, and with 288 A-League matches already under his belt will likely see him break the 300-game mark.

The veteran striker said he is looking forward to another campaign and growing the support and pride for the Mariners that has returned to the Coast.

“This season that we just had was very successful, and after speaking to the club and talking about going around for another year it was an easy decision in the end,” he said.

“It was nice to score the goals, but even nicer to finish third on the table and I’m very happy with how the team and the club went this year and I’m already looking forward to next year.”

Mariners Head of Football Ken Schembri welcomed Simon’s commitment to another campaign on the Central Coast.

“Matty’s name is synonymous with the Mariners, and we were very keen to have him return for another season,” Schembri said.

In other developments, 2020/21 starting wing back, Jack Clisby, is set to leave the team whilst Kye Rowles and Mark Birighitti confirmed they will be staying.

The 29-year-old Clisby joined the Mariners ahead of the 2018/19 season and has played 71 A-League matches in that period, scoring four goals including an effort that won him the Noel Spencer Goal of the Year award in his first campaign.

“Clis has been a very valuable player for us over the past three seasons and was an important player this year during an outstanding campaign,” Schembri said.

“All of us at the club wish him well for his next challenge and thank him for his time here.”

For Clisby, his three-season stint has been fraught with challenges, the former two ending in wooden spoon placements, yet the final one brought palpable successes throughout the year.

“I’ve experienced both sides of the spectrum to what football can bring, from the lowest lows, to finishing on a massive high,” Clisby said.

“I leave here being proud to have been part of this amazing club and I will truly miss the people that had a huge impact on our life whilst we were here.

Absent Clisby, the strength in the Mariners’ back line currently rests with three centre back’s, Socceroo Ruon Tongyik, 2021 debutant Dan Hall and 22 year old Rye Rowles, the latter of whom has just re-singed with the squad for another two years.

The extension of Rowles’ contract was one of the final decisions made prior to Stajcic’s leaving and will see him remain with the club until the end of the A-League 2022/23 season.

Rowles made 127 clearances, 25 blocks and 44 interceptions across his 27 matches, playing the third most minutes of anyone in the Mariners squad this season.

“This year was definitely a great year for everyone involved, and I’m excited to now have that as the foundation and to build on it in the future,” Rowles said.

“I’ve kind of found a second home really, and it just goes to show how friendly everyone is here and how good the club is to be at.”

Schembri also commented on Rowles’ on and off field contributions this season.

“We’re delighted to have Kye committed to the Club for another two years,” Schembri said.

“His play on the pitch this year was so important to our success, and together with his strong football partnership with Ruon [Tongyik] and Dan [Hall], that gives us a solid platform for our continued performance on the pitch.”

Behind these three will remain keeper, Mark Birightti, after his re-signing with the club for a further two years.

The Mariners gloveman has provided a sturdy performance in goal this year, finishing equal second in the league for clean sheets with eight and being an integral ball player through an accurate kicking game.

Birighitti came to the Mariners from Melbourne City ahead of the 2019-20 season, and made an instant impression, winning the Mariners Medal in his first campaign before re-signing for the 2020/21 A-League season.

“I am very happy to spend the next two years on the Coast,” Birighitti said.

“My family is happy and obviously it was an easy decision for me considering the year we’ve just had, very happy and really looking forward to another two years here.

“I’ve been around the league for many years, and this is one of the best dressing rooms I have been a part of.

Schembri said he saw the keeper as rudimentary to the core defensive outfit for his team moving forward.

“It’s great to have Birraz onboard, and it’s clear from the process we have been through that he loves the club and the region, and that he is enjoying his time here,” he said.

“He is a key part of the squad’s core and with him and others signing on we are keeping together the spine of this team.

The movements within the Mariners squad are by no means finished, with more key positions yet to be filled, not the least of which will be the role of Head Coach.

A-LEAGUE KEEPER OF THE YEAR

Goalkeeper Mark Birighitti will don the yellow and navy colours for two more seasons after extending his stay on the Central Coast this week.

The Mariners goal keeper had another superb season on the Coast during the team’s run to third spot, finishing equal second in the league for clean sheets with eight.

Birighitti tallied up a total 65 saves this A-League campaign and finished the season with a 69.9 save percentage.

The 30-year-old said he was looking forward to going around again next season as a key player and as part of the squad’s leadership group.

“My family is happy and obviously it was an easy decision for me considering the year we’ve just had, very happy and really looking forward to another two years here.”

Montgomery is the new head coach at the Mariners