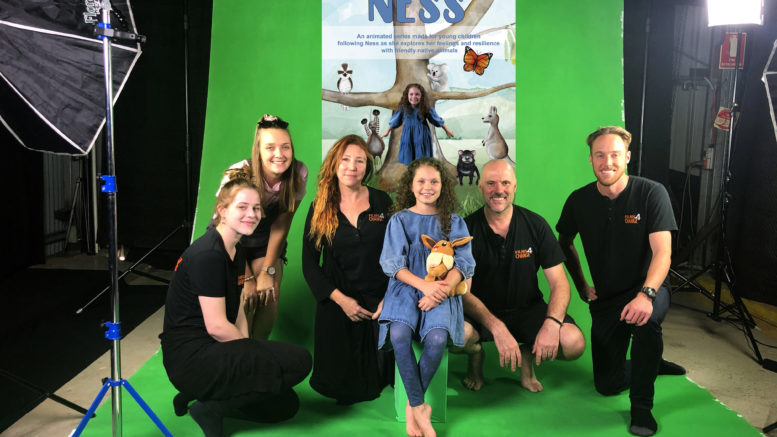 A small not-for-profit film company based at Mount White is making huge inroads into addressing the social issues of the day.

Run by husband and wife team, Melinda Arnold and Jerry Retford, from their home studio, Studio Kreadiv, Films4Change received funding from Central Coast Council in 2020 to produce a series of seven short episodes and is now keen to share them with schools and interested organisations.

The online series features a central character, Ness, who interacts with Australian bush animals as she explores her emotions.

The series has been some months in the developing.

“It was the writing which took the longest,” Arnold said.

“The episodes themselves we filmed in just one day, using an eight-year-old actress, animals drawn by Woy Woy artist Belinda Lindhardt and a green screen.

“Belinda drew the animals in water colours and we animated them, so the episodes show a real person interacting with animated animals.”

As Creative Producer, Arnold did some of the writing and oversaw production, which involved a crew of six.

“I wanted to create films to be put out there on relevant social issues.

“We began with our domestic violence series, which had wide exposure through such organisations as Relationships Australia, the Salvation Army and the Men’s Behaviour Network and is even being used in America and the UK.

“The original idea for Ness came from an indigenous friend of mine who came up with the concept of a central character exploring different emotions.

“I developed the idea and decided to use Australian animals in the series so Ness meets a different animal in each episode.

“I thought that would appeal to our target audience of children aged from Kindy to Year Three or Four.

“I feel it is extremely important for young children to explore their emotions.

The episodes have been developed as a resource to be used in schools, resilience programs and to be available on You Tube Kids for the public.

“We have had some interest from the Iris Foundation and various schools and are eager to hear from any other schools or organisations which might want to make use of them,” Arnold said.