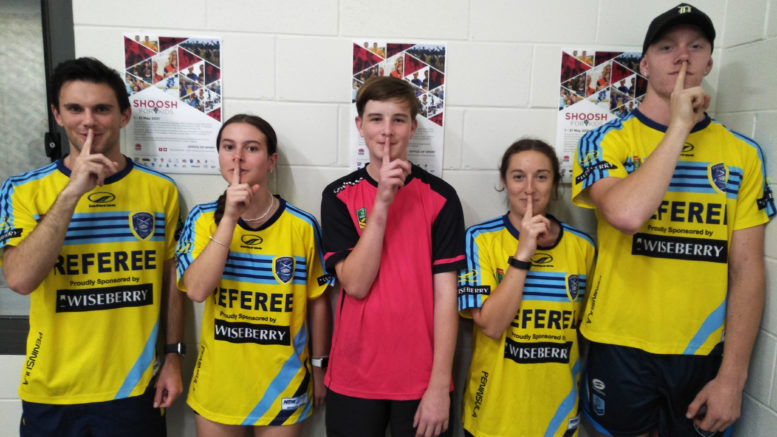 Sporting clubs across the Peninsula participated in a ‘Shoosh for Kids’ campaign last month to help raise awareness about poor spectator behaviour at community sport matches.

The program, which ran throughout May, provided free resources to sports clubs and associations to help promote the positive message.

Peninsula Floorball Club is one of the clubs to have joined the campaign.

Secretary of Peninsula Floorball Club, Kate Hall, said the Club registered for the program to help raise awareness so the ‘good behaviour continues’.

“Our club will be focusing on Shoosh for kids during our finals season, which takes place in June, and sees our highest level of spectators,” Hall said.

“At Peninsula Floorball, I feel we’ve been very lucky to have had great experiences with our parents and spectators.

“I am of the belief that the campaign empowers our young athletes to report inappropriate behaviours and encourages them to have open conversations about this.

“This is achieved by teaching them it is not ok for spectators to display inappropriate behaviours, and that it isn’t something they need to be subjected to.”

President of Peninsula Touch, Rod Dillon, said the Association was proud to be involved in the campaign.

“With increasing numbers of young people at PTA, we think it is really important that we do our bit to create a positive and supportive environment – where all members feel safe and enjoy being involved,” Dillon said.

We hope that by participating in Shoosh that all members will realise that we all play Touch because we enjoy it, and kids are no different.

“We hope that everyone listens to the messages and does their bit to support the campaign, and that is keeping quiet if what you are about to say isn’t positive!

“The Committee has been working hard over many years to support a positive culture and we are proud to say that issues of poor behaviour are not common.

“But no sport is immune, and no sport is perfect – it only takes one person to do the wrong thing and ruin the experience for everyone.

Dillon also spoke about the effect poor spectator behaviour has on budding referees.

“We also have a lot of young referees who do a fantastic job, so we are keen to do everything we can to protect and nurture these young people,” Dillon added.

“But again, it only takes one person to be disrespectful and it can have a significant impact on a young referee.”

The purpose of the ‘Shoosh’ campaign was to promote providing positive environments for members, whilst also addressing issues which arise from poor behaviour such as abuse to officials, reduced volunteer numbers, and reduced participation rates.

Parliamentary Secretary for the Central Coast, Adam Crouch, said it was important to remind parents and spectators that poor behaviour from the sidelines would not be tolerated.

“We want to see all kids on the Central Coast have a positive experience when they participate in community sport and that involves parents and spectators doing the right thing,” Crouch said.

Palliative care is more than you think

Claudia helps bring neurofibromatosis out of the shadows