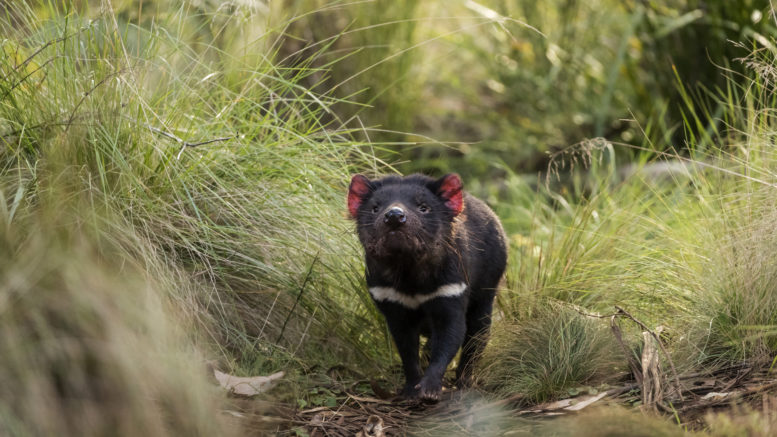 Seven Tasmanian devil joeys have been born to adults released on the mainland Australia for the first time in 3,000 years, and our own Australian Reptile Park General Manager, Tim Faulkner, was there to witness the event.

The project to save these Australian icons was undertaken by Faulkner’s not-for-profit, Aussie Ark, in partnership with Re:wild and WildArk.

Twenty-six adult Tasmanian Devils were released into the wild sanctuary in late 2020, with 7 of those being reproductive females and Aussie Ark is estimating the birth of up to 20 joeys in the wild this year.

Initial pouch checks of the 7 confirmed so far show the joeys are in perfect health and developing as they should be.

Aussie Ark rangers will continue to monitor the mother devils through camera traps and will conduct follow up pouch checks in the coming weeks to ensure the health and wellbeing of both mom and joeys.

Faulkner said the project has been a long process.

“We have been working tirelessly for the better part of 10 years to return devils to the wild of mainland Australia with the hope that they would establish a sustainable population,” Faulkner said.

“Once they were back in the wild, it was up to them, which was nerve wracking.

“We had been watching them from afar until it was time to step in and confirm the birth of our first wild joeys, and what a moment it was.”

Tasmanian devils vanished entirely from mainland Australia in large part because they were outcompeted by dingoes, which hunt in packs.

Dingoes never made it to Tasmania, but across the island state, a transmissible, painful and fatal disease called Devil Facial Tumour Disease (DFTD), the only known contagious cancer, decimated up to 90 percent of the wild population of Tasmanian devils.

Just 25,000 devils are left in the wild of Tasmania today.

For the last decade, the Aussie Ark team has been building an insurance population of Tasmanian devils and learning everything they can about the animals, including about their reproductive physiology, behaviour, and ecological needs, all leading up to the 2020 reintroduction of 26 adult devils.

The program began in 2011 with 44 individual devils and today it is home to more than 200, which is about 50 percent of the entire captive insurance population spread across mainland Australia.