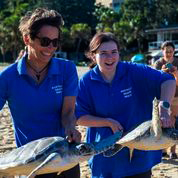 Australian Seabird Rescue Central Coast has taken out the May edition of the #GreaterCentralCoast Community Funding round.

The Central Coast arm of Australia Seabird Rescue was established in 2005 and has grown to now include around 30 volunteers who juggle full-time work and their everyday lives to rescue, rehabilitate and release Australian seabirds, turtles and other marine life that come into their care.

The grant could not have come at a better time for the group, which will use the funds to restock equipment and supplies at the centre.

Cathy Gilmore, who set up the Central Coast arm of Australian Seabird Rescue, said the biggest winners from the #GreatCentralCoast funding initiative will be the birds and animals who come into the group’s care.

“I am just so delighted we have been recognised in such a way by our community and I honestly can’t thank Greater Bank enough for this support,” Gilmore said.

“There is no better feeling in the world than seeing an animal you have witnessed at their very worst recover and thrive again thanks to the love and care you have given them.”

Greater Bank’s Central Coast Regional Sales Manager, Josh Swetnam, said recognising those organisations and volunteers within the region who put the care of animals and others above themselves was always well deserved.

“The program continues to deliver positive outcomes for community groups and organisations on the Central Coast,” he said.

“I’ve been reliably informed that the $2,000 will not only help Cathy and the team at Australian Seabird Rescue with the rehabilitation of Tom the long neck turtle, but also Violet the Crested Tern and Willow the baby spoonbill.

10,000 items planted across the Central Coast