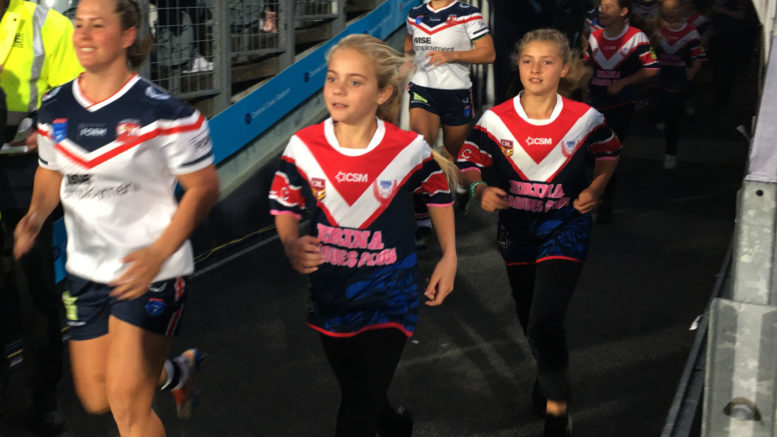 The Roosters take to the field at Central Coast Stadium

The Central Coast Roosters have come away with a Round 12 win against the Cronulla Sharks in the Harvey Norman Women’s Premiership on May 29.

It was a brisk and windy Saturday evening match-up between the teams positioned second and third on the ladder.

Both teams went into the contest with seven out of seven wins throughout their 2021 campaigns, meaning that one team was destined to go home with their perfect run of form at an end.

The opening try came for the visitors in the third minute due to the quick reactions of Corban Baxter, first onto the loose ball.

A high bomb on the try line was miscalculated by the Roosters’ defence and left bouncing on the grass.

Baxter snapped up the ball from her shin height and jogged it in for a try under the post.

The Roosters came close to a quick rebound through a powerful leg drive to the line by Tayla Predebon.

With three players clinging to her, the Prop was determined to reach the white paint, but unfortunately lost control of the ball with the final downward push.

A second try shortly followed for Cronulla from quick passing along their attacking line, finding Andie Robinson on the wing with the overlap.

Despite this, a ferocious energy remained in the Central Coast’s play, with Roxette Murdoch straight away forcing a knock on through a fierce tackle.

The Second Rower followed this up with a strong run up the centre of the defence, taking her team over for their first try of the evening.

With the momentum back on their side, a number of good opportunities to score came for the Roosters, but they were unable to capitalise.

At one point, Alicia Martin did cross over the line out wide, but the assisting pass was deemed forward and the try was disallowed.

Due to this, the teams went into the sheds at half time with the score still positioned at 6 – 10, Cronulla ahead by an unconverted try.

This lead was quickly overturned by the Roosters in the second half, with a try coming for Simone Simone in the 38th minute.

From the penalty touch line, a number of well timed passes and strong running receivers brought them within five metres of the line before Simone’s final carry finished the move off.

Having lost their lead, Cronulla hit back hard with a flurry of attacks from the restart, but two dropped balls quashed their chances at finding points.

The following six phases saw the Roosters advance 80 metres to put their visitors back on their hind legs.

A few minutes later, a third try came for the Roosters, once again scored by Murdoch.

Penitani, alone to deal with an advancing two-on-one situation.

However, Murdoch didn’t need her supporting woman, instead steam rolling over Penitani en route for the paint beneath the crossbar.

With ten minutes to go, another bulldozing run came from Predebon, taking the Roosters right up to the try line.

Although the four-pointer did not immediately follow, the Sharks were kept in their defensive half for the remainder of the game.

With this final touch, the end lead for the Roosters was brought to 24 – 10 after keeping their opposition scoreless in the second half.

The win sees the Roosters overtake the Sharks in second place to now sit beside league leaders, the Mount Pritchard Mounties, also undefeated so far this season.

The next challenge for the Roosters will be against the Mounties in a first verses second clash where, once again, only one team will emerge with their flawless campaign still intact.

Warriors to face Sharks in Gosford