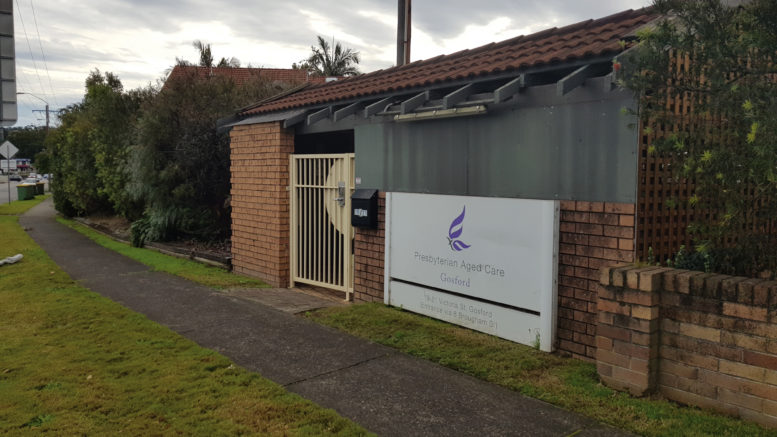 The Presbyterian Church of NSW has decided to sell its aged care facility at East Gosford and promised to help find alternative accommodation for its 74 residents.

General manager of the NSW Presbyterian Church Jeoffrey Falls said the Presbyterian Aged Care (PAC) trustees decided a couple of weeks ago to sell East Gosford and a facility in Stockton.

“We made a strategic decision to sell two out of seven of our facilities,” Falls said.

“There is some confusion about whether we are associated with the Presbyterian Church in Queensland which is in receivership, and we are not,” he said.

“The first thing we did was arrange a meeting with all the residents and all the staff so we were at East Gosford last Wednesday and they were the first to know and I will say without hesitation I left them devastated.”

The nursing home component of the East Gosford property is a small facility that has 39 residents and 40 staff according to Falls.

“The decision of the trustees was to sell both because we cannot continue to financially support them it is as simple as that,” Falls said.

“What I said to residents last week was two thirds of all providers in the aged care industry across Australia are losing money and we are one of those,” he said.

“Everyone has been telling me the East Gosford land is very expensive and we must be selling because we’ve got an offer.”

The property is located within the Somersby to Erina Growth Corridor and shares boundaries with the Eleanora Hotel, which is owned by well-known local developer John Singleton but Hall said “we have not been approached by Singleton Group at all.

“I had absolutely no knowledge of John Singleton and the properties next door.

“The property itself is immaterial to this decision.

“The operation is what we care about because we are a church.

“There were some unbelievably outspoken people at the meeting, and they didn’t believe me when I said we are not in a hurry.

“We have not had an offer – we have not even put it on the market.

Falls said PAC would happily sell the whole operation as a going concern and was in the process of appointing an agent to deal with expressions of interest from other aged care providers.

Residents of the 35 independent care villas are all tenants except for four who purchased their units when the villas were a retirement village.

The four villa owners will be assisted to find alternative retirement village accommodation.

Lisa Philipson, who has a family member living at the complex, said a director from PAC and a chaplain held the meeting with residents from the independent living units.

“The meeting outlined that the premises was on the open market for commercial sale with an agent as of that week,” Philipson said.

“Previously it seemed that the service had been tendered for sale to other aged care providers without success,” she said.

“They did not advise any other details, other than that they were not legally obligated to do any more than inform the residents and were not able to assist with any help in relocating, but they did advise the residents to pray.

“There was no transitional support, no suitably qualified external support person present; the director just repeated the phrase that they were under no legal obligation to assist.

“This news has deeply affected all residents, and their distress and fear are understandably intense.

According to the PAC website the centre is a low-care facility that does not provide dementia care.

The Australian Government Department of Health website says a service provider can ask a resident to leave if the service is closing.

The website also states that before asking or implying that a resident leaves, the service provider “must find suitable accommodation that meets the resident’s assessed long-term needs and is affordable to the resident”.

According to the department PAC is required to give the East Gosford residents a minimum of 14-days’ notice, include the reasons for their decision, say when the resident is to leave and detail the resident’s rights.

Fall said he was happy to respond to any concerns from residents or families and denied that residents were not offered support when the announcement was made.

“We are working with them and it doesn’t matter if it takes six or nine months,” he said.