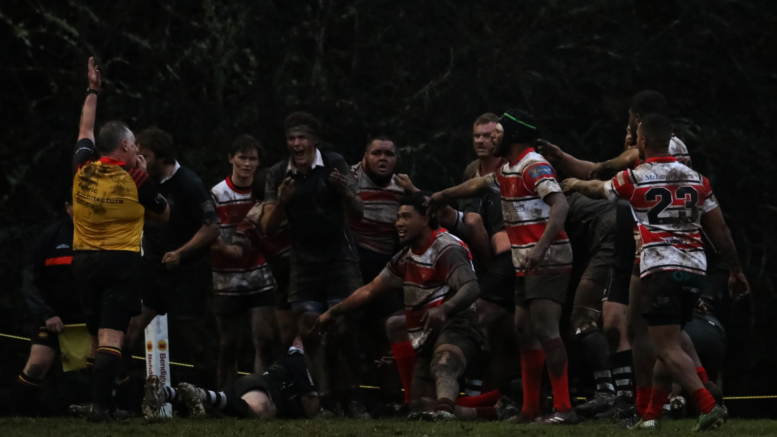 The Ourimbah Razorbacks remain hot on the tail for Club Championships after two wins over the Woy Woy Lions in the Swieteslky Premier One and Premier Two divisions, on Saturday, June 19.

The First Grade Razorback team had a number of returnees after the previous weekend’s Representative rugby fixtures in Tamworth and the Lions were determined to make the most of their week’s rest by returning to the competition with an upset win.

The Woy Woy side came very close in the muddy, wet and windy conditions, but fell short to their hosts at Ourimbah Rugby Park by 29 – 22.

The first half of this match was very evenly fought and there was nothing between the two teams at the halftime break.

The Razorbacks were first to score and able to establish an early lead of 10 – 5, but a late first half surge from the visitors brought two tries to take the half time score to 10 – 17.

A break was what the hosts needed to regain their composure, for they returned to the pitch with new energy put towards the scoring of three tries to find their top score of 29.

Woy Woy were not to be outdone and a late try put them within one converted try of tying up the game.

Nonetheless, the Razorbacks were able to hold on for an important victory that keeps them three points behind league leaders, Terrigal.

In the eyes of Head Coach, Matt Hopkins, the game was a nerve wracking display of two teams very capable of scoring points.

“The score line is indicative of Woy Woy’s ability to score points and also their ability to trouble sides when they come round,” he said.

“For us, we took our opportunities off the back of a pretty dominant scrum, with Connor Pedan scoring twice from this, and it gave to us a platform to attack off.

“Off the fringes, Woy Woy are a really capable side and that score line shows that they can put points on you if you don’t match up to them physically.

“At times we didn’t and they really capitalised on that.”

For one of Ourimbah’s try scorers, Josefa Biu, the win marks a positive return to his club after playing for the Central Coast representative team and then being selected for the NSW Country Cockatoo’s Team, 2021, along with his team mate, Josh Martin, who has made the Under 19 Colts Country side.

“These are two guys that we’re very fortunate to have around the club so its excellent to see them recognised at a higher level,” continued Hopkins.

“For now, we have to keep moving forward and hoping that the representative form brings a continuation of our positive results over the last two months or so.”

Overall, the win, along with that in the Premier Two match, finishing 54 – 0, has elevated Ourimbah on the Club Championship tally from fourth to third, behind Terrigal and Avoca Beach in first and second respectively.

With a bye week across all four teams, The Lakes have dropped down to fifth, with Hornsby filling in fourth place.

Woy Woy remain in seventh place on the Club Championship tally, although they are holding firm due largely to the high quality play of their Women Tens team, Gosford/Woy Woy, who were successful over Ourimbah on the weekend.

The Ourimbah oval ‘pig pen’ lived up to its name on this day, with the winter mud well diced up by the time the Women met at 2:20pm for kick-off.

In the first 10 mins of the game, the Razorbacks had great possession of the ball which allowed the ladies to display great ball skills through hands.

During this possession of the ball Razorbacks scored a quick thinking try by Lorna Martin, converted by Jaimi Elwin.

For Gosford/Woy Woy, Ella Carlisle was very quick on the wing, giving her team a quick couple of tries.

Yet it was the visitors from Gosford and Woy Woy who came away with a three try win, 29 – 12.

It was another positive weekend for the Razorbacks, one that now sees them asking questions of Terrigal and Avoca.

As the Central Coast Rugby season launches into its second half, these three teams, along with Hornsby and The Lakes, are making themselves known as the major players in pursuit for the overall championship win.

The Lakes win Premier One match of the day

Nine try nailing by The Lakes